A look at some different topics related to the economics of food.

Will a rise in population lead to a shortage of food?

I think most people have heard of The Dismal Prophecy of Malthus. (though Economics was termed the ‘dismal science’ for different reasons) Writing in the late eighteenth century, T.Malthus argued that the human population was doomed because the population was growing faster than the ability to grow food. He argued the simple equation of rising population and static landmass meant the world would soon be facing a shortage of food, high prices and famine. Malthus saw this as an inevitability. Yet 150 years on, his prophecy’s look ridiculously pessimistic. Despite, rapid population growth, the food supply has, until now, more than kept pace with rising demand. In fact, places like the EU were producing so much surplus food we had the much-publicised butter mountains and milk lakes e.t.c.

What Malthus failed to appreciate was that food production was not limited to the amount of fertile land.

Despite frequent dire warnings, since the time of Malthus, the impending food crisis had never really materialised (with regional exceptions).

Pressures on the supply of food

Yet, just because Malthusian fears have proved wrong in the past, doesn’t mean that it will always be the case in the future. There are many trends which may disrupt future food supply.

It is true, that the world’s capacity to produce food is still way off its maximum.

Why can the price of food  be volatile?

The elasticity of Demand for Food 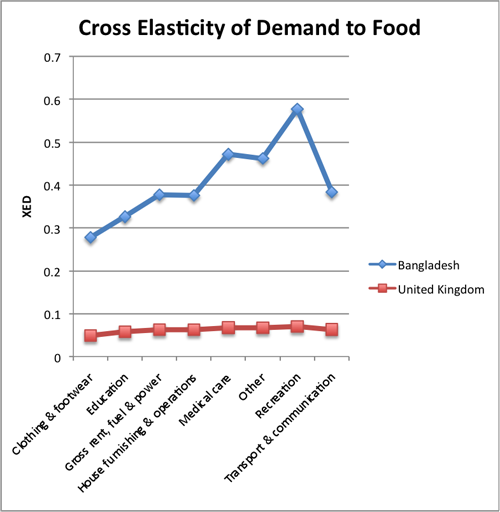 Median income after housing costs fell 12% between 2002-03 and 2010-11 for low-income decile households – while rising in all other income groups.

Food prices have risen 12% in real terms over the last five years taking us back to 1997 in terms of cost of food relative to other goods.

4 thoughts on “The Economics of Food”