It’s always interesting to see how the history of National Debt. The US National Debt, follows a similar pattern to the UK. (UK Historical national debt) Though in the Second World War and 1940s, UK debt increased to over 200% of GDP.

This graph from ZSource, plots US National Debt as a % of GDP

It is interesting to see how much debt as a % of GDP rose in the 1980s. This was a period of rapid economic expansion, and resulted from a decision to cut taxes and increase military spending.

It is also interest that the rapid rise in borrowing in the 1940s, resulted in period of rapid economic expansion (fuelled by war effort and military spending). It did not lead to rapid inflation.

A graph which goes back further in time. 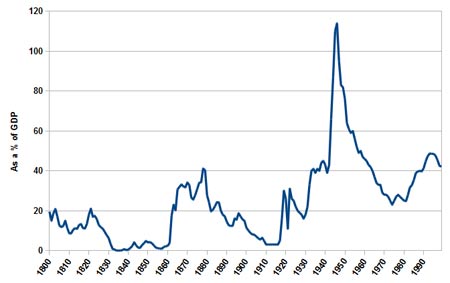 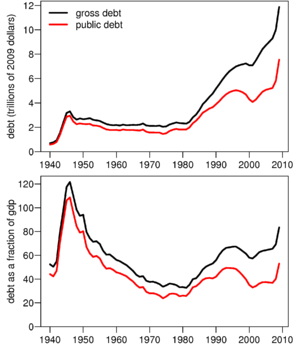 Note, if we just plot Real National Debt, we get a different impression. If we

3 thoughts on “Historical US National Debt”