Readers Question: Economists talk about wage inflation causing price rises, but doesn’t this betray a certain ideology? They make it sound like a bad thing, unions winning greater rights for their staff. But wouldn’t a left wing economist argue that profit in a capitalist system is simply unpaid wages? Rather than taking a cut in their profit, companies pass on the increased costs to the consumer, so does that mean that wage rises in the public sector don’t lead to inflation, because government departments don’t have anything to sell to the consumer that they could increase the cost of? Also, if anti-trust and competition regulations were properly enforced, doesn’t it mean that companies wouldn’t be able to pass on increased costs to the consumer, because of competition, so the workers would get their wage rises, the consumers would get their cheap goods, inflation would stay low and the only negative outcome (for the capitalist) would be that they would earn less profit?

It’s an interesting question. There are a few issues, and it is worth distinguishing between the macro effect or rising wages and the individual decision of what wage a firm will pay.

There is fairly strong evidence that rising nominal wages cause inflation. If average wages in an economy increase, we tend to get both a combination of demand-pull inflation and cost-push inflation. For example, in the 1970s, the high inflation of the UK was closely linked to the rise in wages (partly caused by the power of trades unions) 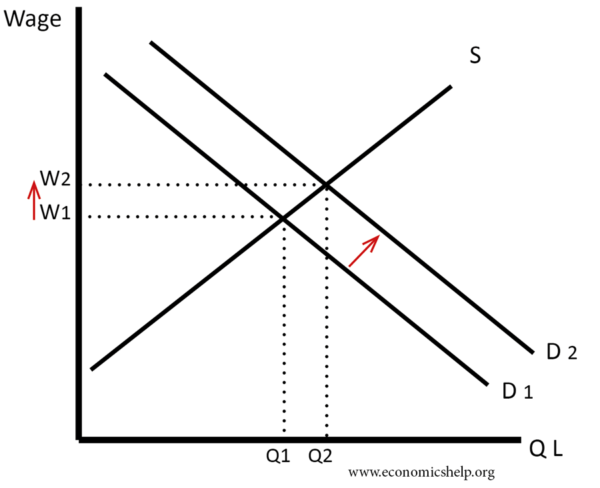 However, it is possible for nominal wages to rise without causing inflation. In this caseworkers will be better off; there will be a rise in real wages. If labour productivity increases 5%, then ceteris paribus, a firm can afford to pay an increase in nominal wages of 5% without any change in profit. Therefore, the rise in wages is less inflationary because the increased wages are offset by the rise in productivity. Therefore, there isn’t cost-push inflation.

Also if productivity in the economy rises, firms can expand production to meet rising demand.

However, if wages increase faster than productivity, then firms will see rising costs. Therefore inflation is highly likely.

Countries like Germany and Japan experienced rising real wages in the post-war period because wages were linked to productivity.

To summarise an economist might say, ceteris paribus, wage increases need to be justified by rising productivity.

Another issue is what is a fair wage in the first place?

A classical economist may argue the fair wage is that which is determined in a competitive market. A firms profit is the necessary incentive a firm needs to set up a business and take risk. If all profit is paid to workers, firms may have no incentives to start a business in first place.

However, other economists might argue that firms can exercise monopsony power and pay workers less than their Marginal Revenue Product (MRP). Therefore, workers are often being exploited by firms with monopsony power. (see: imperfections in labour market for more technical details.)

In this case, an economist may argue that a minimum wage or trade union can help counter-balance the unfair monopsony power of employers. Wages might rise, but this is to reflect what they deserve to be paid.

Therefore, there is both the macro economic implication of rising wages on inflation. But, also more micro economic analysis of individual firms. This depends on whether the labour market is competitive or firms have monopsony power.