Readers Question: What have been the drivers of the mortgage default rate in the 2008 recession compared to the late 1980s/ 1990s?

Despite the depth of the recession in 2008, the mortgage default rate in the UK has  been lower in the current recession than in the early 1990s.

The peak for home repossessions occurred in 1991, when over 70,000 homes were repossessed or 0.77% of outstanding mortgages. 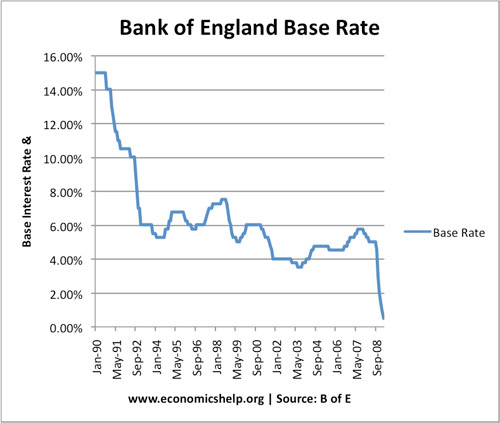 One factor that clearly explains different mortgage default rates is the base interest rate.

The current recession was caused by the credit crunch (not high interest rates). In fact the Bank of England cut interest rates to 0.5% (an historic low) to try and boost the economy. This meant many people on tracker and variable mortgages saw their monthly mortgage payments fall. Therefore, although there was a rise in unemployment and low income growth, at least interest rates were low.

One factor about interest rates is that not every mortgage holder saw their mortgage rate fall by as much as base rates. Many banks took the opportunity of keeping mortgage rates high and not passing the base rate cut on to consumers. Therefore, mortgage rates were still high. But, quite significantly lower than in 1991. 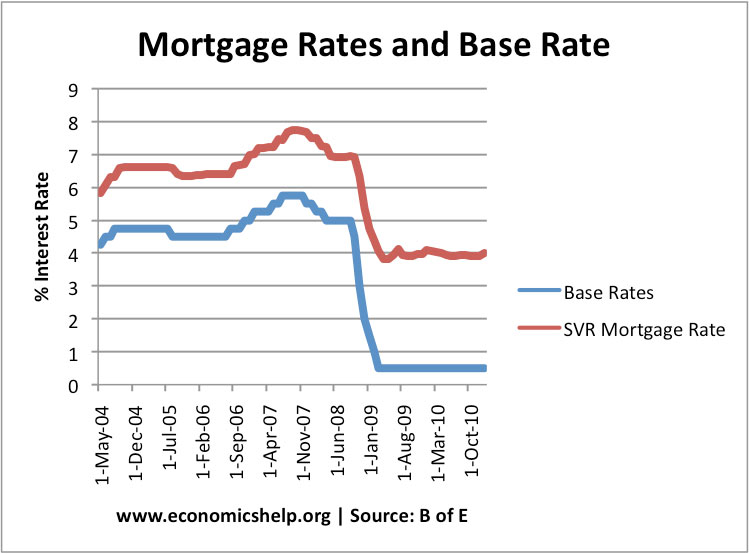 Graph showing the standard variable mortgage rates didn’t fall as much as base interest rates.

In this period, UK unemployment rose significantly. Unemployment is the biggest cause of mortgage defaults as people receiving job seekers allowance see a fall in disposable income and may no longer be able to afford repayments. (UK unemployment)

In 2008, the UK saving rate had fallen close to 0% (UK Saving ratio) as many had borrowed more. Therefore many homeowners had not only mortgage to pay but also credit card and store card debts. Combined with falling incomes the pressure of various debt repayments meant that some defaulted on mortgage.

The 2008-10 economic slowdown was a period of stagnant or falling real incomes (falling real wages). For one of the first times, people in work saw negative real wage growth. Inflation was higher than nominal wage growth leading to squeeze on living standards. This squeeze in real incomes makes it more difficult for people to meet mortgage repayments.

During the boom years of 2001-2007, banks had lent unorthodox mortgages such as four or five times income multiples and self-certification mortgages. This meant many homeowners were paying a large % of their income on their very high mortgages.

1 thought on “Reason for Mortgage Defaults”