Inflation is a period of rising prices. The primary policy for reducing inflation is monetary policy – in particular, raising interest rates reduces demand and helps to bring inflation under control. Other policies to reduce inflation can include tight fiscal policy (higher tax), supply-side policies, wage control, appreciation in the exchange rate and control of the money supply. (a form of monetary policy).

Summary of policies to reduce inflation

The first step is for the MPC to try and predict future inflation. They look at various economic statistics and try to decide whether the economy is overheating. If inflation is forecast to increase above the target, the MPC are likely to increase interest rates.

Increased interest rates will help reduce the growth of aggregate demand in the economy. The slower growth will then lead to lower inflation. Higher interest rates reduce consumer spending because:

Base Rates and Inflation 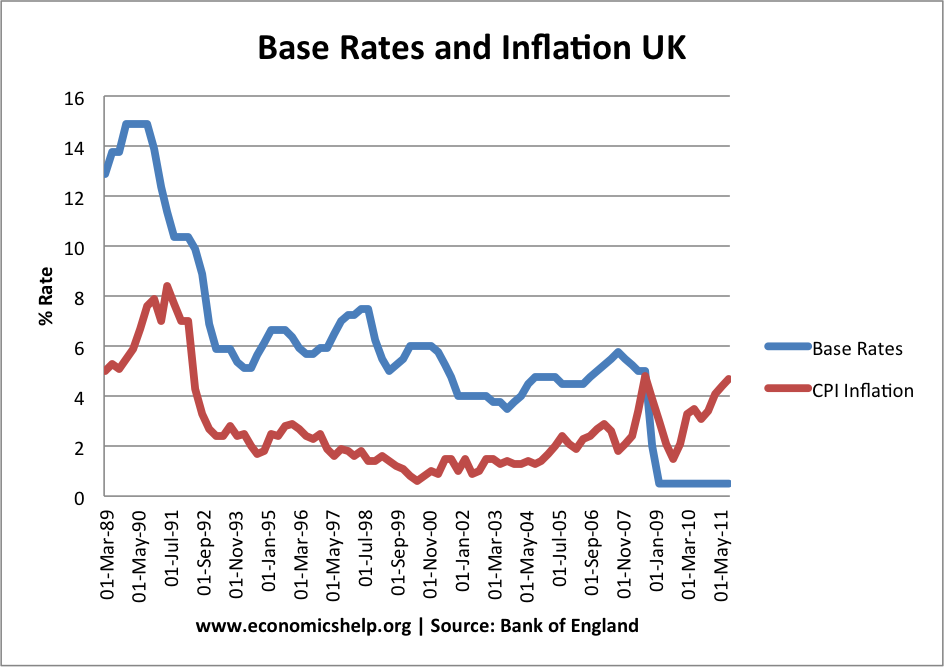 Base interest rates were increased in the late 1980s / 1990 to try and control the rise in inflation.

This is another demand-side policy, similar in effect to monetary policy. Fiscal policy involves the government changing tax and spending levels in order to influence the level of Aggregate Demand. To reduce inflationary pressures the government can increase tax and reduce government spending. This will reduce AD.

In the late 1980s, the UK joined the ERM, as a means to control inflation. It was felt that by keeping the value of the pound high, it would help reduce inflationary pressures.

The policy did reduce inflation but at the cost of a recession. To maintain the value of the £ against the DM, the government had to increase interest rates to 15%, and this contributed to the recession.

The UK no longer uses this as an anti-inflationary policy.

Wage growth is a key factor in determining inflation. If wages increase quickly, it will cause high inflation. In the 1970s, there was a brief attempt at wage controls “Price and Incomes policies) which tried to limit wage growth. However, it was effectively dropped because it was difficult to enforce widely. See Price and incomes policies.

6. Targeting Money Supply (Monetarism) In the early 1980s, the UK adopted a form of monetarism, where the government sought to control inflation by controlling the money supply.  To control the money supply, the government adopted higher interest rates and reduced budget deficit. It did bring inflation down but at the expense of a deep recession. Monetarism was effectively abandoned because the link between money supply and inflation was weaker than expected. See: UK economy 1979-84

Difficult types of inflation to control

In these cases of cost-push inflation, it is harder to reduce inflation, and it is maybe better to let the temporary inflation factors come to an end.

42 thoughts on “Policies to reduce inflation”