Inflation means a sustained increase in the general price level. The main two types of inflation are

We can also categorise inflation by how fast the price increases are, such as:

Types include of inflation include

This occurs when AD increases at a faster rate than AS. Demand-pull inflation will typically occur when the economy is growing faster than the long-run trend rate of growth. If demand exceeds supply, firms will respond by pushing up prices.


The UK experienced demand-pull inflation during the Lawson boom of the late 1980s. Fuelled by rising house prices, high consumer confidence and tax cuts, the economy was growing by 5% a year, but this caused supply bottlenecks and firms responded by putting up prices. Therefore the inflation rate crept up.

This occurs when there is an increase in the cost of production for firms causing aggregate supply to shift to the left. Cost-push inflation could be caused by rising energy and commodity prices. See also: Cost-Push Inflation

Example of cost-push inflation in the UK

In early 2008, the UK economy entered a deep recession (GDP fell 6%). However, at the same time, we experienced a rise in inflation. This inflation was definitely not due to demand-side factors; it was due to cost push factors, such as rising oil prices, rising taxes and rising import prices (as a result of depreciation in the Pound) By 2013, cost-push factors had mostly disappeared and inflation had fallen back to its target of 2%. After the June 2016 Brexit referendum, Sterling fell another 13% causing another period of cost-push inflation in 2017.

Rising wages tend to cause inflation. In effect, this is a combination of demand-pull and cost-push inflation. Rising wages increase costs for firms, and so these are passed onto consumers in the form of higher prices. Also rising wages give consumers greater disposable income and therefore cause increased consumption and AD. In the 1970s, trades unions were powerful in the UK. This helped cause rising nominal wages; this was a significant factor in causing inflation of the 1970s.

The inflation rate can also increase due to temporary factors such as increasing indirect taxes. If you increase VAT rate from 17.5% to 20%, all goods which are VAT applicable will be 2.5% more expensive. However, this price rise will only last a year. It is not a permanent effect.

One measure of inflation is known as ‘core inflation‘ This is the inflation rate that excludes temporary ‘volatile’ factors, such as energy and food prices. The graph below shows inflation in the EU. The headline inflation rate (HICP) is more volatile rising to 4% in 2008 and then falling to -0.5% in 2009. However, the core inflation (HCIP – energy, food, alcohol and tobacco) is more constant.

Types of inflation by rate of increase

When the rate of inflation slowly increases over time. For example, the inflation rate rises from 2% to 3%, to 4% a year. Creeping inflation may not be immediately noticeable, but if the creeping rate of inflation continues, it can become an increasing problem.

When inflation is in single digits – less than 10%. At this rate – inflation is not a major problem, but when it rises over 4%, Central Banks will be increasingly concerned. Walking inflation may simply be referred to as moderate inflation.

When inflation starts to rise at a significant rate. It is usually defined as a rate between 10% and 20% a year. At this rate, inflation is imposing significant costs on the economy and could easily start to creep higher.

This is an inflation rate of between 20% up to 1000%. At this rapid rate of price increases, inflation is a serious problem and will be challenging to bring under control. Some definitions of galloping inflation may be between 20% and 100%. There is no universally agreed definition, but hyperinflation usually implies over 1,000% a year.

This is reserved for extreme forms of inflation – usually over 1,000% though there is no specific definition. Hyperinflation usually involves prices changing so fast, that it becomes a daily occurrence, and under hyperinflation, the value of money will rapidly decline.

Example of Inflation in the UK 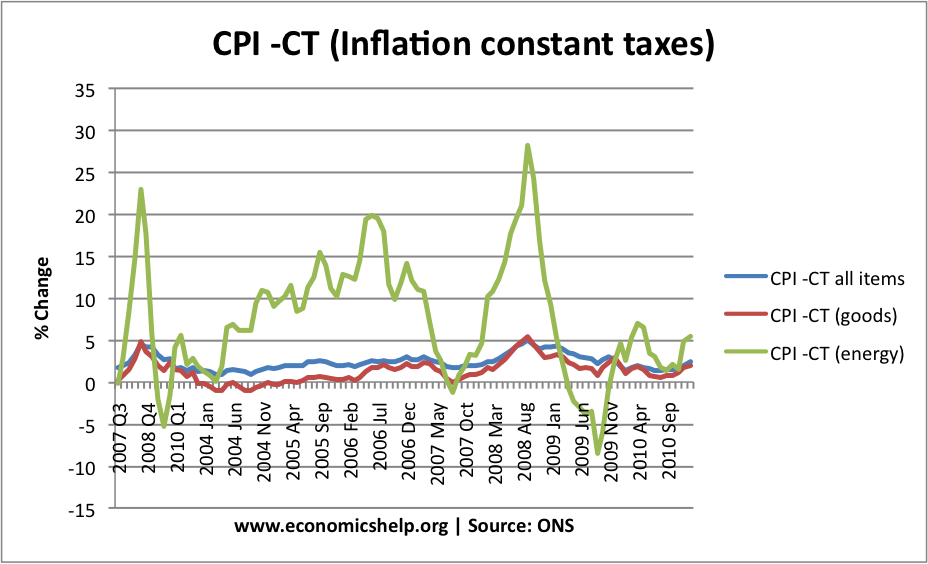 This shows that energy prices were very volatile in this period, contributing to cost-push inflation in 2008. 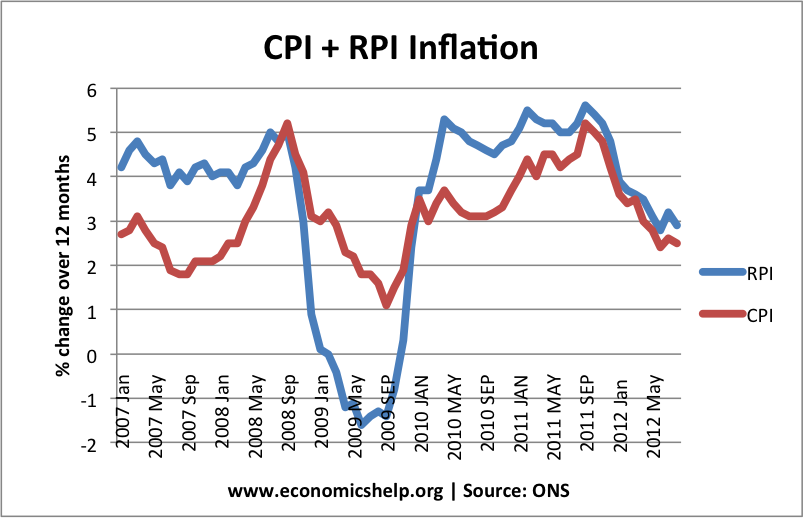 Inflation tends to be global. In the 1970s, rising oil prices caused inflation in most major economies. Since the 1990s, inflation has fallen across the world.

13 thoughts on “Different types of inflation”