One of the great challenges facing Europe is the persistence and increase in levels of unemployment. The highest rates of youth unemployment are in Spain (51%) and Greece (51%). Other countries include Italy 35%, France 21%, UK 21%, Portugal 36%

Youth Unemployment in the UK 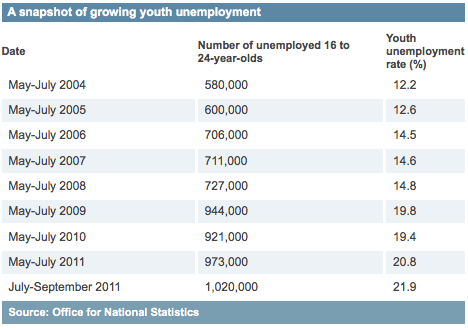 This shows how youth unemployment in UK has increased since the great recession. source:BBC

Low growth and recession since 2008, have pushed up rates of youth unemployment. As economic growth becomes negative firms take on fewer workers, meaning it is difficult for the young to get their first job. Economic growth in the Eurozone has been very sluggish. In southern European economies real GDP has been falling. Spain recently entered a double dip recession. Greece is experiencing rapid declines in GDP. The problem is that Europe struggles to have a coherent strategy on economic growth.

ECB president, Mario Draghi talks about the need for a ‘growth pact’ but at the same time the ECB is reluctant to cut interest rates from 1.00%, and they insist on the importance of ‘countries not shirking’ from their fiscal disciplines – i.e. countries are having to cut public sector spending whilst being in a single currency which is overvalued. It is a recipe for lower demand and negative growth. With no strategy for economic growth, it will be very difficult to make inroads into the fundamental lack of demand and growth in the Eurozone. Therefore, there will remain significant demand deficient unemployment.

The flexibility of Labour Markets

Mario Draghi recently pointed out that in Europe, youth labour markets tend to be very flexible, but older workers benefit from substantial job security. To Mario Draghi a ‘growth pact‘ would involve making labour markets more flexible and thereby encouraging firms to take on workers in the first place. It would also stop the current ‘discrimination’ against young workers which means they are the first to lose their jobs. When firms need to make workers redundant it is much easier to make young workers redundant because they don’t have job security or binding payouts.

This difference in labour market flexibility is one reason to explain why youth unemployment is so much higher than average unemployment rates. To tackle, this we would require a European wide imitative to reform labour market flexibility. It is hoped that if EU labour markets are more flexible then it will encourage firms and entrepreneurs to set up a new business and create jobs. However, removing job security for older workers will be politically unpopular and doesn’t necessarily create jobs – though it might help young workers relative to older workers.

A conventional solution to youth unemployment is to give more focused and useful education and training schemes. This helps young people find jobs in a competitive labour market. It is one solution to structural unemployment caused by a mismatch of skills. Also, a more productive labour market will help European firms be more competitive and encourage investment. The difficulty is that governments don’t always have a great track record of improving practical skills and qualifications. Either schemes are too small to be effective or the money is not directed in a useful way. It may be more effective for the government to subsidise private sector training.

Youth unemployment was high before the economic recession. Therefore, there is a need for supply side policies to tackle some of the inefficiencies and inflexibilities in the EU labour markets. However, supply side policies are only part of the problem, there is also the need for the EU to target positive and sustained economic growth. In the present circumstances, the EU should be targeting economic growth and lower unemployment more than inflation.

3 thoughts on “How to Deal With Youth Unemployment”