After recent data on -0.7% growth in Q2 2012, several experts offered suggestions for restoring economic growth to the UK.

The UK’s output figures, which show a quarterly drop of 0.7%, are not surprising. Economies with big public spending to GDP ratios have difficulty growing.

Cutting government spending in an economic boom can be absorbed. It is fine to cut spending – if the private sector have the opportunity to replace government demand.

Ireland’s cuts  in the 1990s were quite successful – helped by independent currency, strong export demand and loosening of monetary policy. But Irish austerity policies since 2008 have been a disaster for economic growth. The problem is that government spending cuts in the 2000s, have not led to the private sector taking the place of the government.

In the current climate, the private sector is unwilling to invest because it is uncertain there is the demand in the economy.

Therefore, cutting government spending in the current climate, is unlikely to cause ‘crowding in’ of the private sector.

It is not enough to just rely on supply side policies and strutural reforms, a key factor determining private sector investment is not just amounts of red tape – but is the demand there to buy the goods?

The UK Government has cut spending by 1.5% in 2011/12. Many of these cuts have fallen on public sector investment projects, such as building new schools.

The sector with the biggest falls in output in the last quarter were construction spending. – Suggesting that the cut in government infrastructure have not been offset by a rise in private sector investment spending.

Shouldn’t the Private Sector Take the Place of Government Spending?

Many economists believe that if you cut government spending, then the private sector has now the opportunity to invest.

But, it all comes down to timing.

Because bond yields are so low, cutting government spending wouldn’t push down bond yields. We are in a liquidity trap, where rates are low despite high levels of debt. The government can borrow at very low rates to finance investment the private sector is currently unwilling to undertake. 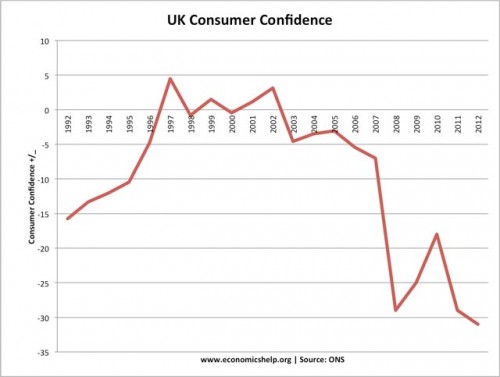 Crowding in of the private sector could occur if.

Do Countries with Lower Government Spending as a % of GDP grow at a faster rate?

There are so many variables affecting economic growth that looking at the % of Government spending as a % of GDP is highly prone to ‘cherry picking’.

If you look at this table here: list of spending as % of GDP, you can really take your pick and choose your countries to support your point of view.

Some of countries with highest levels of government spending as a % of GDP have best living standards. Developing countries, often have a low ratio. This means they may have scope for faster rates of economic growth, but it may not.

To come back to the question: will cutting UK government spending by £100bn increase economic growth?

No, the most likely scenario is that it could push the UK into a serious depression, which is being experienced by Spain and Greece. In the current economic climate real spending cuts of upto 5-10% of GDP would not be offset by a boom in private sector spending and investment.

It is possible, if the economy recovers sufficiently then government spending as a % of GDP could fall.
If the economy recovers, if we leave the liquidity trap, if the savings rate starts to fall, if bond yields start to rise as people want to invest in private sector rather than save in bonds