The Chancellor recently spoke on the Andrew Marr show. G.Osborne said of the UK economy:

“We are getting on top of the deficit… They are difficult times for the British economy; it’s a difficult time for the world economy, but our economy is healing. We have to do more and we have to do it faster.”

For the first few years of the coalition government, there was a tendency to talk down the economy – say how bad things were. This  contributed to negative confidence in the economy, which is still a factor today. It is something that the chancellor is trying to be more positive, but if the economy is really healing – it is a very slow form of healing. 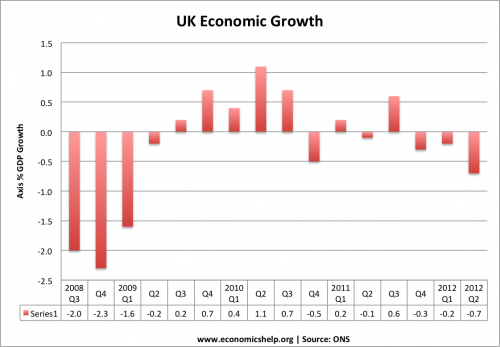 The UK is still stuck in a double dip recession and now manufacturers are reporting the toughest conditions for three years.

An EEF survey – compiled with accountants BDO – shows that a balance of just 4% of manufacturers said output had increased in the third quarter, down from 20% in the second quarter. Only 3% said orders had increased, down from 17%. [link]

Rather worryingly, exports dropped sharply in the third quarter as the global economy shows no sign of recovery. If the global economy stalls, it will prove very difficult for a stagnant UK economy to buck the global trend. The UK economy is a like a boat becalmed on a lake, hoping someone will come and blow it along. It is little comfort that the UK boat is not sinking like some in Europe…

The Chancellor still shows a sign of equating deficit reduction to economic progress. In the longest and deepest recession since the 1930s, reducing the deficit is a sideshow – missing the essential problem of high unemployment and falling GDP. If only the government could realise that achieving economic growth is the best way to achieve a sustainable debt to GDP ratio.

“Britain’s economic problems are deep rooted, built up over many years,” Mr Osborne added. “If there was a quick fix, or an easy road, I would be the first on it. There is no alternative easy road.”

It is true that Britain’s economic problems are deep rooted. The double dip recession is not just due to the current government policies. The government faces an unwelcome combination of debt deleveraging, global uncertainty and weakness in the banking sector. These are all factors outside it’s control. I don’t envy the Chancellor’s position.

However, if there isn’t a quick fix, policy could have been substantially different. There was no case for cutting capital investment during the depth of the recession. The government has realised the importance of economic growth too late.

Recent government promises of increasing capital spending and funding of infrastructure investment shows that belatedly the government are trying a different policy. ‘Better late than never – but it is a shame we didn’t have a government willingness to invest three years ago. Also, I doubt whether the government will have the courage to make very substantial investment – preferring minor dabbling so they have something positive to talk about.

10-year government bond stands at 1.46pc compared with 2.65pc in October last year. One thing is for sure, it will be very cheap for the government to borrow for investment.

1 thought on “Is the UK Economy Healing?”