In 2015, the German current account surplus surged to 8.5% of GDP. A record level and a surplus which has implications for the Eurozone and global economy.

The surplus is primarily due to the surplus on trade in goods. Though in recent years, there has also been a surplus in primary income. This is mostly net income from foreign investment oversees.

What does Germany produce?

Germany is a net exporter of cars, capital goods, such as machines.

It is a net importer of oil, energy and food.

In 2015, exports accounted for 35% of total German economic output

1. Undervaluation of Euro. Since 2000, German unit labour costs have risen by about  20%-30% less than its main Eurozone competitors. This means German exports have become roughly 20% more competitive, but there has been no change in the exchange rate – The Euro permanently fixes the exchange rates. If Germany had its own currency, we would expect the D-Mark to appreciate by 15-20%

If Germany still had the D-Mark, it is almost certain that the increased competitiveness of German exports would have caused an appreciation in the German currency. This appreciation would have rebalanced demand – lowed export demand, and encouraged more German imports. A flexible exchange rate would have moderated the rise in the German current account surplus. The current account surplus would have much much  less than 7% of GDP. But, in the Euro, there is no currency revaluation.

2. Strong export sector. German manufacturing has done relatively well in recent years. There have been improvements in productivity, and high-tech German exports have weathered the global downturn, better than many other countries. For example, Germany is less affected by the financial services decline like the UK; Germany is less affected by increased competition on low tech manufacturing industries like Italy.

4. Saving greater than investment. In 2015, saving was 25% of GDP (driven by ageing population), whearas investment was 16% (indicating weak economic growth). This indicates a large savings surplus. This contributes towards a current account surplus because spending (on imports) is low

5. Fall in oil prices. Part of the recent rise in the German current account surplus is a decline in oil and gas prices. As Germany is a net importer, the fall in price of oil has reduced the value of imports, causing a bigger surplus.

The real problem of the German current account surplus is not for the US (they can still devalue against the Euro and have their own monetary policy). The real problem is faced by countries in the south of Europe who are experiencing severely depressed domestic demand.

Given the imbalances in the Eurozone, southern European economies face a long period of deflation as they slowly seek to restore competitiveness against their northern competitors. However, given European wide austerity, this period of deflation is proving very costly in terms of lost GDP and high unemployment.

If Germany was willing to boost domestic consumption, and temporarily target higher inflation, this would provide greater export demand within Europe. A lower German current account surplus would help increase economic growth in southern Europe. Given the debt crisis and lack of growth, export led growth would be very welcome for easing the depth of the recession.

However, Germany is currently unwilling to pursue any policy which risks a slight deviation from the inflation target. (The ECB increased interest rates in 2011 over concerns about inflation). Therefore, with domestic demand constrained, the German current account surplus is likely to remain. This will be a factor in keeping demand elsewhere in Europe depressed.

Some argue that the Eurozone crisis shows that southern European economies need to be more like Germany / Netherlands. Rather than relying on devaluation – this crisis should be the spur to cut unit labour costs, increase productivity, remove inflexibilities in the economy and boost exports. But, as many have pointed out, you can’t have every country having a current account surplus of 8% of GDP! – Not every country can benefit from have an undervalued exchange rate. Secondly, the structural reforms to restore competitiveness take a long time and are creating great economic pain. In theory,  it sounds fine – restore competitiveness. But, in practise in requires several years of deflation, mass unemployment and wasted resources – which creates a negative multiplier effect. The kind of price readjustment we are seeing in southern Europe could lead to painful social disorder.

However,  The current account deficits are falling primarily because of  weake domestic consumption. If you have a deep recession because of austerity, imports will fall – improving the current account. However, there still needs to be a more positive rebalancing of European demand. Germany could learn to love a little bit of inflation and investment. It might prove less painful than the continued request to bailout countries in the throes of debt deflation.

A few years ago, global trade imbalances were dominated by China and the US. At its peak, China’s current account surplus reached over 10% of GDP. By contrast, the US current account deficit reached over 6% of GDP. The classic image was of China manufacturing goods, selling them to the US  consumer.

Then with this export revenue, China bought US Treasuries to keep the Chinese Yuan permanently undervalued. Many in the US criticised China for this ‘currency manipulation‘ – In fact, Mitt Romney, the 2012 Republican Presidential candidate, promised to label China a currency manipulator from day one. However, Romney was really a couple of years behind reality.

China still has a current account surplus, but it has fallen from 10% of GDP to 2.6% of GDP in 2012. China’s currency is no longer chronically undervalued, and the Yuan has appreciated 40% in real terms against the Dollar since 2005. Although China’s economy is still reliant on exports and investment, it has begun a process of rebalancing the economy. It is not the same source of global imbalances that it was five years ago, 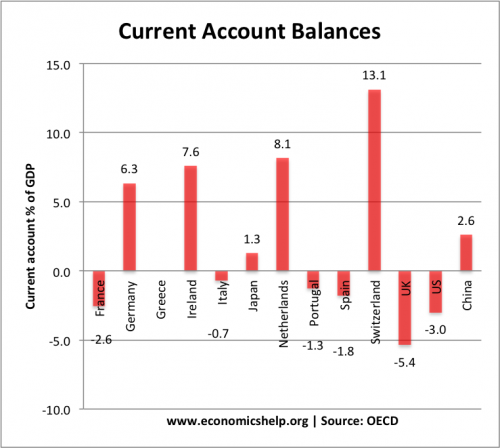 The largest current account surplus is in Switzerland (13.1% of GDP) though this reflects the unique challenges Switzerland faces as a safe haven resort (investors trying to save money in a safe currency are pushing up the Swiss Franc causing an appreciation.)

The UK now has one of largest current account deficits in OECD.

Germany and Netherlands reflect the idea of two speed Eurozone – Countries in the north much more competitive than the south leading to large current account surplus.

Since 2008, countries on the periphery of the Eurozone, such as Spain, Portugal and Greece – have all seen a fall in their current account deficits. This is a consequence of their depressed economies. With fiscal austerity consumer demand has been squeezed leading to lower spending on imports.

However, European policies have not had any impact on the German current account surplus.