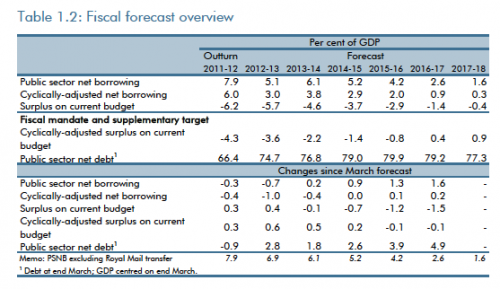 When interest rates are very low (as currently) the Treasury is making a profit on the asset purchase scheme.

Public sector net borrowing will be lower in the near term than it otherwise would have been, as the Treasury receives the coupon payments on the gilts held by the APF, minus the interest that the APF has to pay the Bank for the loan that allowed it to purchase them. (asset purchase facility)

By putting these proceeds into the current budget, it helps to reduce the budget deficit. However, it is expected in a few years, interest rates will rise causing the bank to making a loss. Previously, the profit/loss from Asset Purchase facility was going to be calculated at the end of Q.E. programme.

The OBR state: the Asset Purchase Facility reduces PSNB significantly – by £7 billion in 2016-17. This decision will lead to higher borrowing in 2017-18 and the years beyond our forecast horizon;