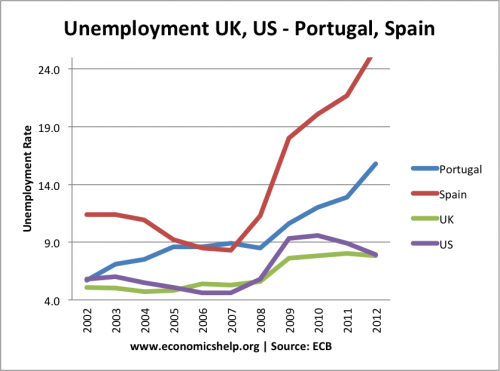 At the start of the economic crisis in 2007, Portugal and Spain both had unemployment rates of around 9% – higher than UK and US of around 5%.

This suggests that Portugal and Spain had higher structural unemployment. Reasons put forward for higher unemployment rates in the EU, included factors such as:

Unemployment since the Economic Crisis.

Since 2009, there has been a sharp divergence amongst these four countries. The US has shown the best employment picture with unemployment falling from over 9% to less than 8%. The UK has also had a better unemployment rate than might be expected given the UK’s growth figures.

However, both Spain and Portugal have witnessed a real unemployment crisis, with the unemployment rate increasing to over 16% (Portugal) and approaching 25% (Spain). Why have these countries experienced such a rapid increase in unemployment? 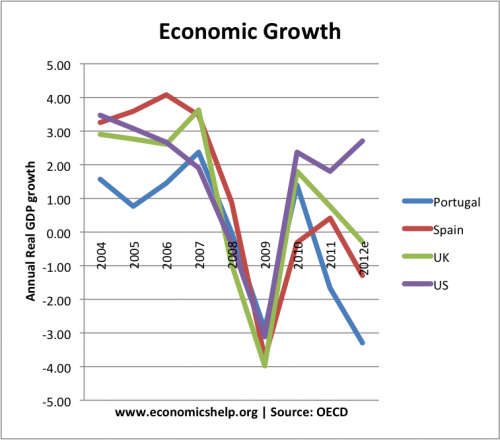 Statistics for 2012 are estimates, but the double dip recession has been much deeper in Portugal and Spain. This is primarily a reflection of the Euro-crisis and consequence of being in the Euro. Partly struggling with a lack of competitiveness, the economies have also been hard hit by austerity measures which have caused falling demand. Part of the austerity measures have included public sector job losses. Jobs which haven’t been replaced by the private sector job creation.

Clearly demand isn’t the only factor. But, the massive rise in unemployment seen since 2007 is essentially a demand side problem.

The UK unemployment picture is slightly puzzling – usually, the UK doesn’t see falling unemployment during a period of falling GDP.

If Spain and Portugal were outside the Euro would it be different?

Yes. They would have much more room for manoeuvre. They would have benefited from devaluation, looser monetary policy, lower bond yields and more time to deal with cyclical deficit. They would also be in charge of their own destiny and free to pursue growth rather than being part of the European obsession with low inflation.