We tend to consider the impact of immigration on our own country. – How do immigrants affect UK unemployment? UK housing? UK labour markets? and GDP (e.g. economic impact of immigration). However, the flip side of the coin, is how does migration affect developing economies? Recently, the World Bank reported that migrants working in developed economies sent a record breaking level of remittances back to the developing world.

Remittances and other Transfer Flows to Developing Economies 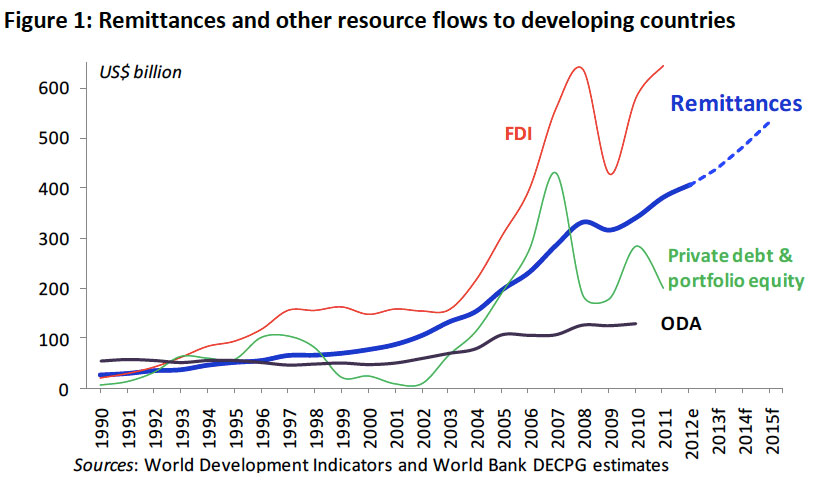 As a percentage of GDP, the top recipients of remittances in 2011 were

Economic Impact of Migration and Remittances

For some countries, money sent back in the form of remittances from migrant workers comprises a substantial portion of GDP and their balance of payments. For very poor countries like Tajikistan, remittances make up nearly 50% of GDP so clearly it is very important for increasing GDP and living standards.

Remittances are sent to family members, therefore unlike aid, it isn’t siphoned off into corruption or misdirected arms projects. However, remittances may not be sent to the very poorest in developing economies meaning that remittances still leave a gap, which may need to be funded by aid.

One substantial drawback of remittances is that it means developing economies lose their best, most skilled young workers. It can lead to a situation where so many adults have migrated to a richer country, children are being brought up by grandparents (e.g. in Philippines – article at Guardian) This has both an economic and social cost. The economy loses because young workers are not available, society loses out by the displacement effect of young adults not being there. On the other hand, people wouldn’t undertake the upheaval of moving to other countries, if they didn’t think their families would benefit.

Migrants who work in developing economies, such as the US can also develop useful skills, such as the English language. The experience of working abroad may give them the skills and confidence to return home and set up a business. However, migrants often take the lowest skilled jobs, and migrants to the Gulf states of Saudi Arabia and Kuwait may have more limited opportunities to develop skills such as English. Migrants often face difficult working conditions and expressions of Xenophobia from domestic citizens who resent the migrants.

Overall, the sum of remittances is very substantial and goes some way to reducing global inequality. It could be seen as a positive demonstration of globalisation. The free movement of labour enables greater opportunities for people in developing economies and also helps developing economies gain important foreign currency revenue. Developed countries benefit from a more elastic supply of labour, enabling greater labour market flexibility.

With this level of  Remittances is aid no longer necessary?

Remittances may still leave important gaps, for example, to regions where it is very difficult for workers to migrate. Some projects may not be funded by remittances because of market failure. However, the level of remittances can be seen as a complement to traditional aid.

In the debate on immigration, the remittances from migrants are rarely considered. If it’s good to give to charity, is it good to encourage migrants who do the job of aid for you? It’s a new argument in the immigration debate.

‘Trade not aid’, could be changed to

‘Trade, Remittances and effectively targeted aid can all contribute to improved living standards in developing economies’ not as catchy perhaps.

1 thought on “Economic Impact of Migrants and Remittances”