Generally, government debt is shown as a % of real GDP because this is best reflection of a countries ability to repay.

However, this wouldn’t completely reflect the ability to repay the debt. For example, if Switzerland had a high level of debt to tax, it is in a better position to increase tax rates to raise more revenue if necessary. France by contrast already has high tax rates, and when France tries to increases tax rates it may create disincentives (like famous movie stars moving to Russia).

Also, you could argue that a lower tax country like Switzerland will encourage more private enterprise and a stronger economy. If a country was strangled by high taxes. It would see it’s debt to tax ratio fall, but the economy may weaken.

However, although it is best to measure government debt as a % of GDP, it is still useful to examine debt as a proportion of government tax take. For example, some developing economies struggle to raise tax revenue. A large proportion of GDP may be beyond the government. If the government can only collect 10% of GDP in tax revenue, this limits their ability to repay even modest levels of debt. It is definitely worth taking into account.

Debt Interest payments as a % of Tax Revenue.

One useful tool for measuring the affordability of government debt is relative cost of debt interest payments as a % of GDP and as a % of tax revenue. 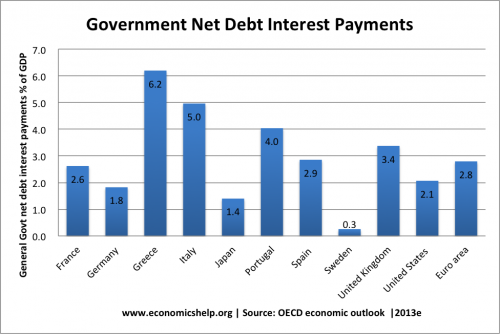