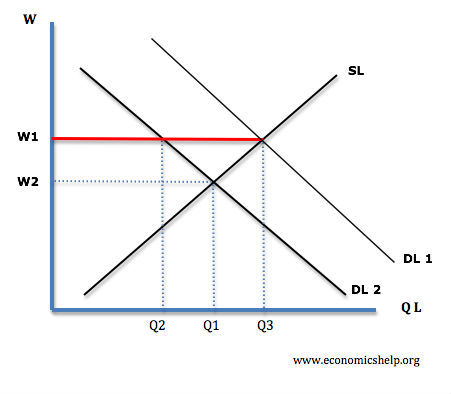 This diagram shows how a fall in demand for labour causes unemployment – if there are wage rigidities which keep wages at W1 and not fall to W2.

Importance of price and wage rigidities in new Keynesianism.

Why are prices rigid

Why wages are rigid

Although these two schools are considered to be different schools, they share several features. They both focus on more micro-economic foundations of macro-economic theory, and are more accepting of the classical view in the long-run. The Neo Keynesians were the first to emerge after the Second World War, with P Samuelson being an important populariser of this ‘watered down version’ of Keynesianism.  New Keynesianism developed later and places greater importance on DSGE modelling and rational expectations.