A minimum price for alcohol means that alcoholic drink cannot be sold below a certain price. It is  aimed at preventing the sale of very cheap alcohol by supermarkets. The hope is that a higher price will discourage binge drinking, improve health, and make people pay a price closer to the true social cost of alcohol. Opponents argue it is unfair and a regressive price which will hurt the living standards of those on low income. Furthermore, if you wanted to increase the price of alcohol – a tax is a better way to increase the price because the public will benefit from improved tax revenues.

The UK has a problem with binge drinking. Overconsumption of alcohol can lead to many social problems, such as increased crime, increased accidents. It contributes to a variety of health problems such as premature death, cirrhosis of the liver, heart disease, cancer, alcoholism, and mental problems.  All these places costs on the NHS, which have to be borne by the taxpayer. The UK’s alcohol problem is much worse than most European countries, like France. According to the ONS, in 2010/11, there was an 11 percent increase in alcohol-related (hospital) admissions (based on attributable fractions) giving a total of 1,168,300 admissions. This is more than twice as many as in 2002/03 (510,700). (Channel 4 report on alcohol)

Some studies showing costs of alcohol:

Academics say that total deaths from the “wider harms” caused to society by alcohol could reach 250,000 in England and Wales by 2019 if current trends continue. (250,000 deaths from alcohol)

According to a report, “Health First: An evidence-based alcohol strategy for the UK”. “The personal, social and economic cost of alcohol has been estimated to be up to £55bn per year for England and £7.5bn for Scotland,”

Effect of a minimum price of 45p or 50ps

A minimum price of say 45p per unit would mean a can of strong lager could not be sold for less than £1.56 and a bottle of wine below £4.22.

Research carried out by Sheffield University for the government shows a 45p minimum would reduce the consumption of alcohol by 4.3%, leading to 2,000 fewer deaths and 66,000 hospital admissions after 10 years. Researchers also claim the number of crimes would drop by 24,000 a year. (Minimum price targets high-risk drinkers at Univ. of Sheffield)

Research by Sheffield University shows that if alcohol is priced at 45p per unit consumption drops by 4.3% – a 75% greater effect than would be seen at 40p. In addition, the biggest effect is amongst young ‘binge’ drinkers who are most price sensitive. Scotland is considering a minimum price of 50p – where the effect would be even greater.

Arguments for a minimum price for alcohol

Arguments against minimum price for alcohol

The argument about equality and living standards is misplaced. I don’t think that avoiding minimum alcohol pricing is the way to promote greater equality. The most important thing is to set a price for alcohol which is optimal for society. Given the widespread abuse and social costs associated with consumption of cheap alcohol, the price should be raised, and we should see a significant reduction in some alcohol-related problems. It is by no means a panacea, there are many other things that need to be done to address problems related to alcohol, but high prices do have some effect in reducing demand – especially amongst some young people.

Suppose alcohol was already at 50p per unit, and this was considered to be a good socially efficient price, would it make sense to cut the price of alcohol to improve the living standards of those on low incomes? No. If we wanted to improve living standards it would make more sense to redistribute income through benefits, taxes – rather than making it cheaper to buy a demerit good.

However, if you are going to increase the minimum price of alcohol, there is a much stronger case for alcohol tax – rather than a minimum price. A tax gives the government much needed tax revenues. A minimum price is an easy way for supermarkets and drink producers to increase revenue.

Just a brief note on the economics of minimum prices. A simple supply and demand model suggests a minimum price above the equilibrium could cause a surplus (supply greater than demand). This did occur with the minimum prices of the Common Agricultural Policy (CAP). 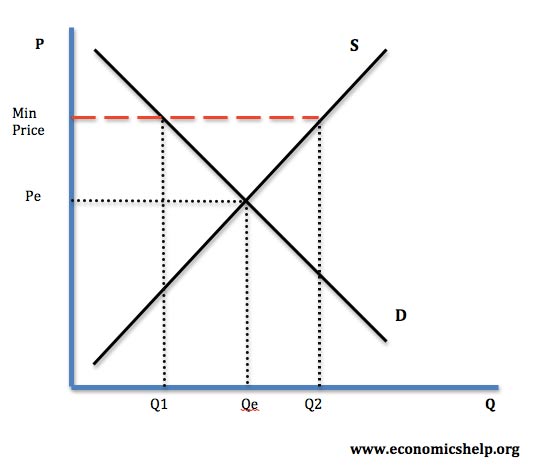 However, with alcohol pricing, this wouldn’t occur. Supply and demand are both very inelastic, supermarkets would just put up the prices

Externalities in alcohol can lead to market failure and social inefficiency. This provides a case for government intervention. To show the negative externalities of alcohol, we could either show:

Diagram for negative externality in consumption

If you consume alcohol, there are costs to the rest of society – drunkenness, lost productivity, cost of policing, costs of health care. You might think there is a personal benefit of drinking, but with these costs the social benefit is less than your private benefit. You have a good night out, but your firm loses out from your lower productivity on a Monday morning.

In a free market, the outcome would be Q1, but this is greater than the socially efficient level – there is overconsumption. At Q1 – SMC>SMB

If the government set a minimum price of P2, it would reduce demand to Q2 where SMB = SMC and the outcome is socially efficient.

Another way of thinking of the external costs of alcohol is that as alcohol is produced, there is a cost to the rest of society not met by the individual drinker – therefore the social marginal cost of drinking is greater than private marginal cost. Arthur Pigou used alcohol to illustrate his concept of externalities in The Economics of Welfare (1920)

A Pigovian tax is a tax which makes individuals pay the full social marginal cost.

A minimum price of P2 would have the same effect of reducing output to the socially efficient level of Q2.

11 thoughts on “Minimum price for alcohol – pros and cons”