Readers Question: I’ve recently been studying monetarism and I have a question with regards to printing money. It is well known than printing money leads to inflation as demonstrated by the Fisher equation, but say if the new money created was all spent on imports i.e. all the newly printed money leaked from the domestic economy, would printing money in this scenario still lead to inflation? I am inclined to say yes because of an appreciation of the exchange rate due to increased expenditure on imports, but I would like some clarification and I would also like to hear from your ideas and thoughts.

Assuming certain conditions, there is a rough link between the money supply and inflation

The quantity theory of money MV = PY is true from a theoretical perspective.

However, it makes several assumptions so the link between the money supply and inflation is more tenuous – especially in a liquidity trap and the conditions we see at the moment.

The basic quantity theory of money assumes a closed economy. If you print money this increases the money supply in the UK. But, if this extra money gets all spent on imports, then the money leaks away from the UK economy and the money supply in the UK will be unchanged. (Unless we spend on imports in Europe, and this increase in demand for European goods caused Europe to have a much bigger increase in demand for UK exports. Then we may see money coming back into economy)

Similarly, if the Central Bank increased the monetary base, this doesn’t necessarily increase the broad money supply and inflation. We know from the experience of quantitative easing in the UK, that we can see a large increase in created money, but it doesn’t necessarily lead to inflation. Commercial banks sold bonds and increased their cash reserves, but because the banks didn’t want to lend the extra money, the impact on M4 and inflation was minimal.

US monetary base expansion 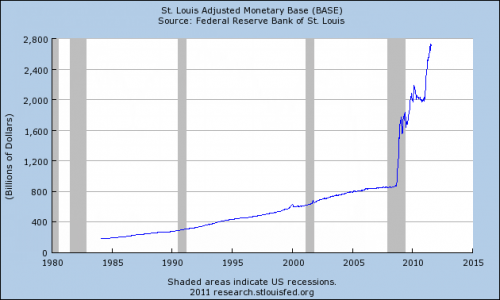 Increase in monetary base, led to big increase in commercial bank deposits at Federal Reserve. 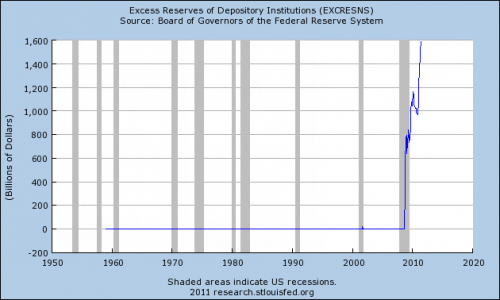 The effect on inflation was minimal. 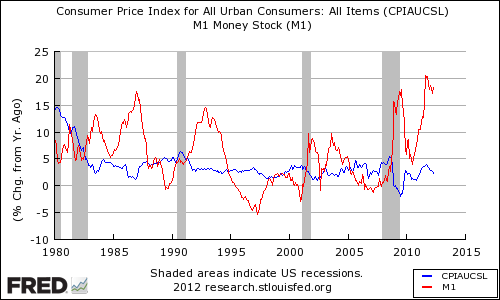