Abenomics refers to the economic policy of the current Japanese prime minister Shinzō Abe. The aim of the policy is to stimulate strong economic recovery and help the Japanese economy to escape a cycle of deflation, and low growth. 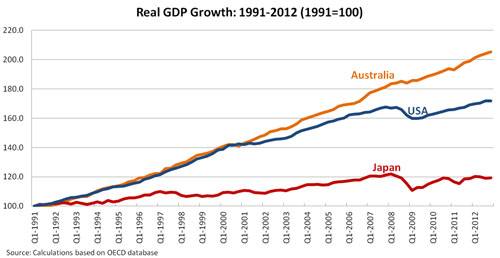 Can Japan break the cycle of low growth?

The range of policies include:

How it is supposed to work

So far, the impact of these policies is relatively positive. Economic growth is higher in Japan than most other industrialised world. In the first three months of 2013, GDP increased at an annualised rate of 3.5% [WSJ] There has been strong export growth. Importantly, there appears to be a change in confidence and attitude towards the economy. People are more optimistic and the concentration is on economic recovery. Wage growth is negative, business investment is still weak, and it remains to be seen whether the pro-growth policies can maintain

3 thoughts on “Abenomics – a Japanese recovery?”