How much is the internet helping to increase productivity? Do distractions like Facebook and Twitter mean the overall benefits of the internet are less than we might hope? How does the internet compare to other technology revolutions, such as stem power and electricity?

I often work from a cafe. It’s a nice combination – good Italian coffee, a bit of caffeine and writing becomes quite enjoyable. At a cafe, there are less distractions that at home – no telephone to answer, no door-to-door canvases to politely turnaway. The growth of the internet and the laptop has enabled more people to work away from  home and really work anywhere. Working from the comfort of a cafe is one of the brave new world of flexible working practises. When I go to a cafe, I always see quite a few other people of this new generation of laptop workers.

I’m not a nosy person, I wouldn’t want to look at what other people were working on. But, sometimes, you can’t help but glance at a screen. The funny thing is that when ever I see a screen, it nearly always seems to be Facebook! I have no idea what people do on Facebook (I don’t have an account). But, my theory is that if you take a random look at a laptop, 50% of the time people will be logged on to Facebook. So are all these laptop workers really increasing their productivity by working from home?

When Henry Ford made use of the assembly line, he enabled a huge growth in productivity through exploiting economies of scale, but there was no real downside. True working on an assembly line can become boring and there is a danger of reducing worker morale, but the assembly line doesn’t give an infinite supply of distractions like funny cat photos or instant messaging from people you went to school with 20 years ago. The assembly line is pretty much a one way conveyor belt to increased productivity. The internet, by comparison is a different kettle of fish.

Through using the internet, you can find information much quicker than the old method of going to a library and handing in a request to the librarian. It has enabled more data to be made available that previously was unavailable.

But, the problem with having all your information at your finger tips, is that there are innumerable distractions. Bored with researching UK inflation? well there are plenty of more entertaining things to pass your time. Before you know it, hours can pass and the original intention of working has been lost in a sea of innumerable videos, links and comments.

In the good old days, you would go to work in a library. If you got bored you could stare out of the window or perhaps make a paper airplane to throw out of the window, but now when you go to work, you can be inundated with numerous distractions and temptations.

How much is the internet actually increasing productivity?

In the past few years, we continue to make huge technological strides. The price of laptop computers continues to fall, whilst their power increases. Yet over the past few years, labour productivity statistics in countries like the UK and US have been mostly disappointing. 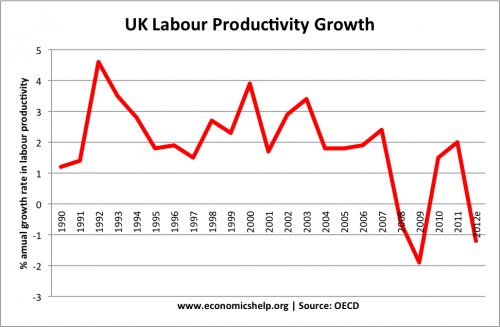 Firstly, there are many factors affecting labour productivity, and the biggest factor in the past few years is the ongoing recession. But, studies are suggesting that the internet may not be increasing productivity as much as say, the steam revolution or the electricity revolution.

In the US, during the eight years from 2005 to 2012, output per hour expanded at an annual rate of just 1.5 per cent—the same as it grew between 1973 and 1996. (What happened to the internet productivity miracle? at New Yorker) See: America’s productivity problem)

How much is the internet increasing labour productivity?

It is hard to quantify. Also, the technology is still relatively new. Google is only 15 years. It took many decades after the first steam engine was invented for it to be widely used across the world. The internet could become more useful, quicker and more efficient. But, will the internet ever remove all the time wasting cat videos (and worse)? I doubt it.

The internet is definitely a challenging invention. It can give huge benefits, but it can also suck us into a virtual world that is neither productive or illumining. From a personal perspective, it requires a degree of self-discipline so the internet becomes our tool rather than becoming a slave to internet.