Exchange rates are determined by factors, such as interest rates, confidence, the current account on balance of payments, economic growth and relative inflation rates. For example:

If inflation in the UK is relatively lower than elsewhere, then UK exports will become more competitive, and there will be an increase in demand for Pound Sterling to buy UK goods. Also, foreign goods will be less competitive and so UK citizens will buy fewer imports.

If UK interest rates rise relative to elsewhere, it will become more attractive to deposit money in the UK. You will get a better rate of return from saving in UK banks. Therefore demand for Sterling will rise.  This is known as “hot money flows” and is an important short-run factor in determining the value of a currency.

If speculators believe the sterling will rise in the future, they will demand more now to be able to make a profit. This increase in demand will cause the value to rise. Therefore movements in the exchange rate do not always reflect economic fundamentals but are often driven by the sentiments of the financial markets. For example, if markets see news which makes an interest rate increase more likely, the value of the pound will probably rise in anticipation.

The fall in the value of the Pound post-Brexit was partly related to the concerns that the UK would no longer attract as many capital flows outside the Single Currency.

If British goods become more attractive and competitive this will also cause the value of the exchange rate to rise. For example, if the UK has long-term improvements in labour market relations and higher productivity, good will become more internationally competitive and in long-run cause an appreciation in the Pound. This is a similar factor to low inflation.

5. Relative strength of other currencies

In 2010 and 2011, the value of the Japanese Yen and Swiss Franc rose because markets were worried about all the other major economies – US and EU. Therefore, despite low-interest rates and low growth in Japan, the Yen kept appreciating. In the mid-1980s, the Pound fell to a low against the Dollar – this was mostly due to the strength of Dollar, caused by rising interest rates in the US.

For example, if markets feared the US would default on its debt, foreign investors would sell their holdings of US bonds. This would cause a fall in the value of the dollar. See: US dollar and debt

Some governments attempt to influence the value of their currency. For example, China has sought to keep its currency undervalued to make Chinese exports more competitive. They can do this by buying US dollar assets which increases the value of the US dollar to Chinese Yuan.

A recession may cause a depreciation in the exchange rate because during a recession interest rates usually fall. However, there is no hard and fast rule. It depends on several factors. See: Impact of recession on currency. 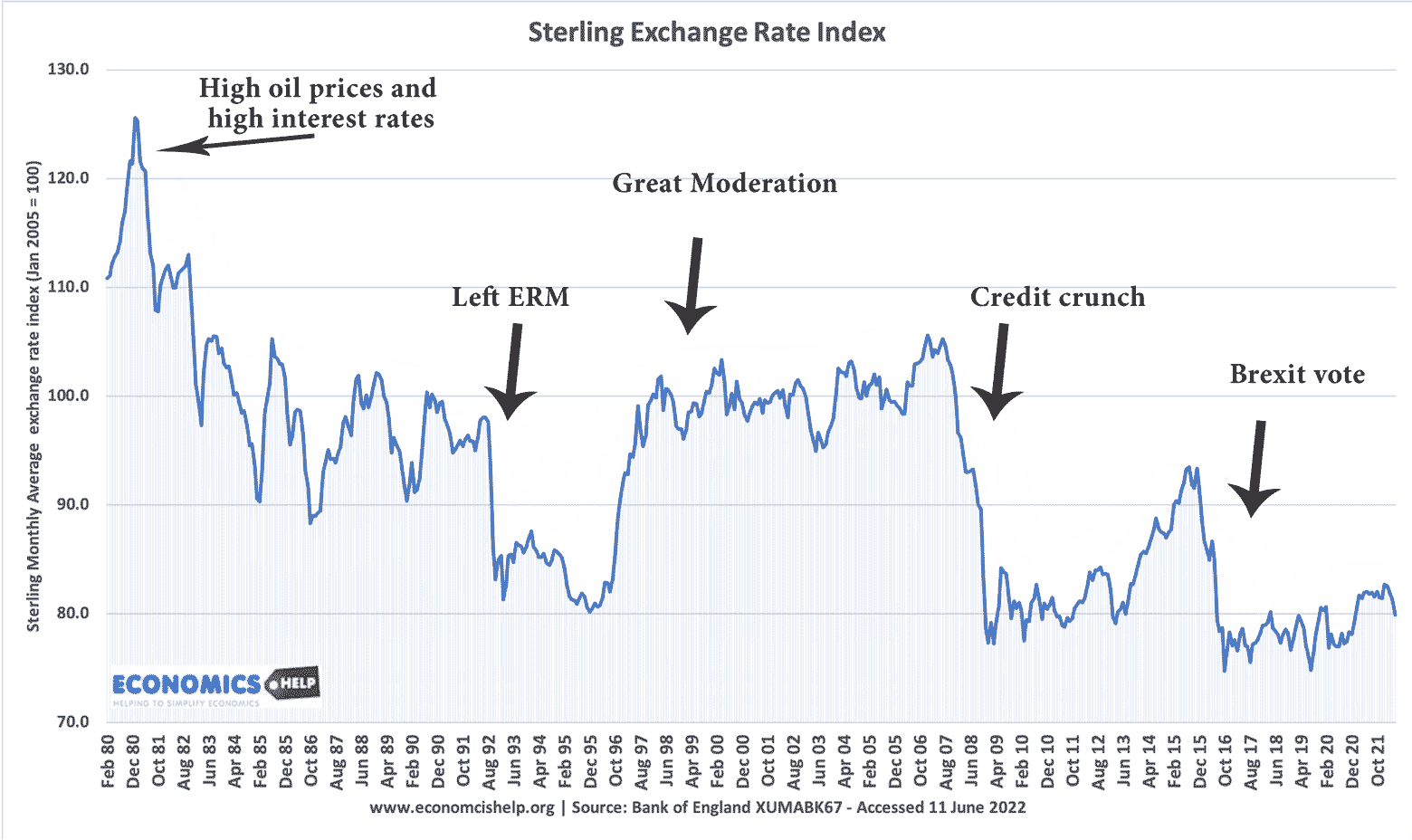 Sterling exchange rate index, which shows the value of Sterling against a basket of currencies.

A Large devaluation in 1992, occurred when the UK left Exchange Rate Mechanism. When the UK left the ERM, they were able to cut interest rates sharply, which restored economic growth but also made it less attractive to save in UK banks.

1 thought on “Factors which influence the exchange rate”