The World Bank publishes several measures of global poverty, which measure poverty by different levels of income. The most common is the percentage of the population who live on less than $1.90 a day. This is a measure of absolute poverty.

There are also measures of relative poverty which compare income against the national average.

The % of the population making less than a certain income at purchasing power parity (PPP). Two measures include:

This is the mean shortfall in income or consumption from the poverty line of $3.20 a day (counting the nonpoor as having zero shortfall), expressed as a percentage of the poverty line. This measure reflects the depth of poverty as well as its incidence.

Multidimensional Poverty Index (MPI) has been published by the UN since 2010. It measures poverty as an acute deprivation of essential aspects of life. It measures three key targets – living standards, education and healthcare.

The MPI includes the World Bank headcount ratio, but also factors such as health, education, access to sanitation, water, electricity and the intensity of poverty. 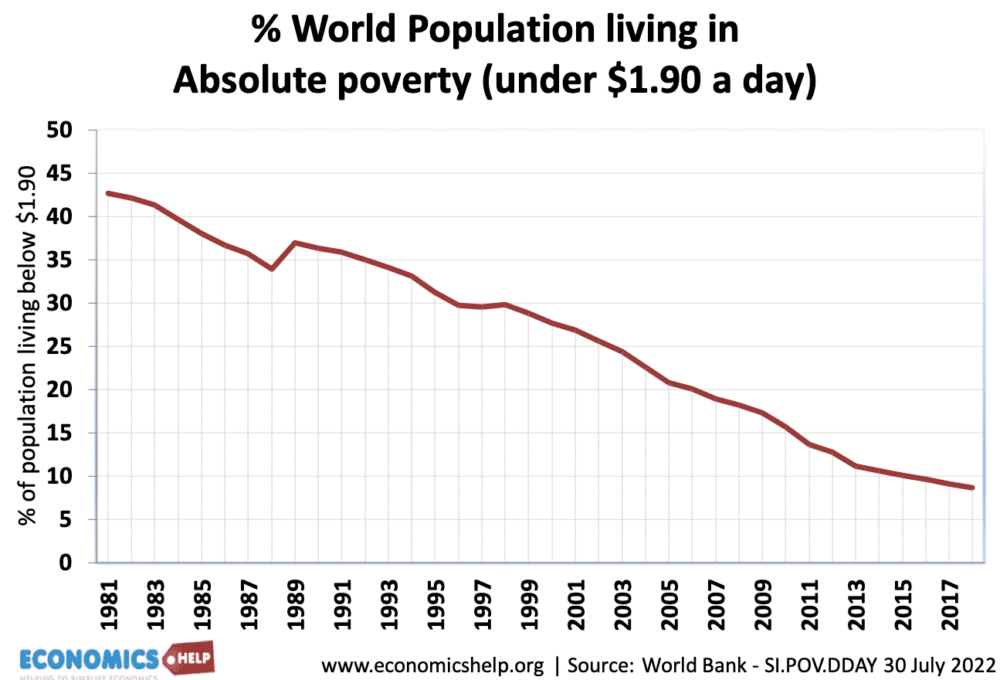 This graph shows that since 1981, the world has seen a decline in the percentage of the world’s population who live under this definition of poverty.

Income can be hard to measure. In areas of extreme poverty, individuals may be living under conditions of ‘self-sufficiency’ – growing own crops. It is possible someone could have a reasonably good living standard – living off their fields, but it appears a very low monetary income. Equally, somebody may earn $2.00 a day, but find they have to spend a high percentage on housing and food, making it difficult to gain sufficient calories

The link between poverty line and satisfaction

This shows that there is a link between income and dissatisfaction. Low income is associated with greater reports of dissatisfaction. However, amongst countries with very low GDP per capita, there is a big divergence in the reported standard of living. Bangladesh has very low income, but comparable levels of satisfaction to rich countries, such as the US, Hong Kong and Ireland.

Which line to use? Using different lines can give different outcomes. Should we measure at $1.90 or $5.50?

Why fall in Global poverty?

The fall in absolute poverty is quite marked in both past 200 years and also in the past 20 years. The main reasons for the fall in global poverty include