The highest rates of obesity in the world are found in the small pacific islands,  Nauru, Cook Islands with close to 60% of the adult population meeting definition of obesity as measured by the BMI (body mass index)

Excluding these small pacific islands (with very small population) the greatest levels of obesity are found in the Gulf states (Kuwait 37.9%)) and the United States (36.2%) Obesity rates across the world have been increasing in recent decades.

Highest rates of obesity in the world – top 25

The countries with the lowest obesity rates tend to be low-income developing economies, though Japan is an exception.

The link between calory consumption and obesity

In the gulf states, obesity levels are significantly higher amongst women – which could be related to different lifestyles and lower likelihood of being involved in exercise.

Growth of obesity in recent years 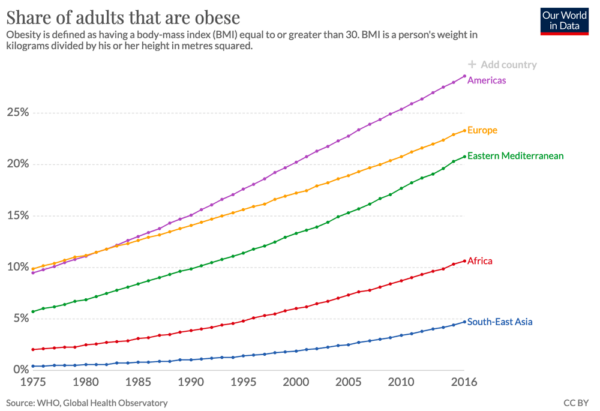 Source: Our World in Data