The next 12 months are going to see unprecedented demands on the government budget. It is likely GDP will fall 10-20% – if not more. On its own, this would lead to a surge in government borrowing

The Corona recession would cause a very significant rise in government borrowing, but the chancellor Rishi Sunak has announced further measures to help an economy on virtual lockdown.

Furthermore as many have pointed out, this still leaves four million-plus self-employed, who currently are being asked to survive on £94 a week universal credit.

There are four main ways to pay for this emergency spending

The goods news is that the government’s capacity to borrow is quite high.

In WWII, the OBR said the UK ran a budget deficit of nearly 27% of GDP (compared to usual borrowing of around 3%). 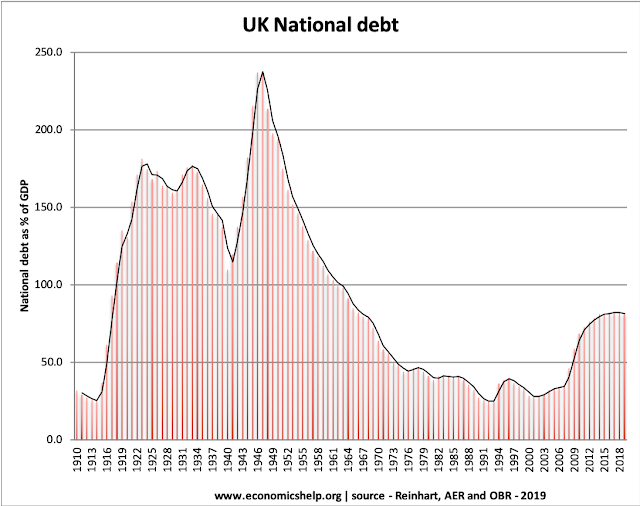 By the early 1950s, UK national debt had risen to 240% of GDP. Yet this was not a significant problem. In the post-war period, the UK enjoyed a long period of economic expansion, where debt to GDP ratios fell.

In March 2020, UK debt to GDP ratio was around 80% of GDP, so there is significant room for an increase in government debt. This is a real crisis and not a time to worry about debt.

Demand for bonds is likely to be relatively strong as the private sector will not be investing in private investment or the stock market, but will prefer the relative security of government bonds.

Will borrowing not cause rising interest rates? 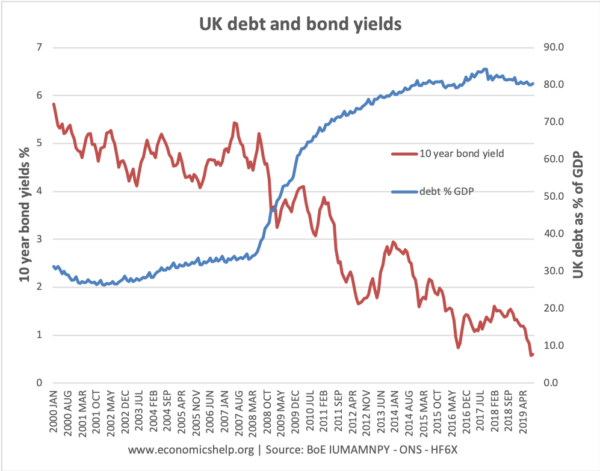 If the economy was close to full capacity, higher government borrowing would cause crowding out – less private sector investment and higher bond yields. But, in an economic downturn, the government can borrow more and not face higher interest rate costs. Fortunately, bond yields are currently very low, making borrowing relatively cheap.

There is a danger if the economic crisis is prolonged and banks start to report more loan defaults – markets may start to have a greater fear of government default – but we are a long way off from that.

Some economists (especially those believing in MMT) argue the only constraint to government borrowing is inflation. In a severely depressed economy, with inflation falling (and possibly deflation) it may be desirable for the government to create money and target a positive inflation rate of say 3%. In 2009/10 recession, US and UK financed a large part of extra borrowing through quantitative easing, without causing any inflation.

In March 2020, the Bank of England has rolled out over £200bn of quantitative easing – creating money to buy government debt. This is a big injection of new money. In normal circumstances, printing money would cause inflation. But, these are not normal circumstances – with GDP in freefall, inflationary pressures will be very low.

There is also a case for raising income tax rates and corporation tax rates.

In 2020, there is an unusually strong diminishing returns on higher income. Firms don’t need to be paying out multi-million-pound dividends. For people earning over £100,000, there is a diminishing return of that extra income. In a lock-down economy, how do you spend large sums? It is not a year for luxury foreign holidays.

One aspect of higher taxes is that traditionally it deflates demand. However, if you redistribute money from high-income earners to those on universal credit, it will actually cause higher demand because of different marginal propensity to consume. Those on Universal Credit will spend every extra £1 they receive. Income above high levels will probably be saved.

This policy can be very temporary (6 months, 12 months) but it helps to show that ‘we are all in together’ Would high earners really begrudge higher tax so people can meet the very basics of life?

The truth is that higher tax, would only raise a small percentage of the money needed, but it would have a psychological benefit for bond markets – showing the government is serious about long-term effects of borrowing splurge. Also, it creates a sense of fairness.

The government could consider delaying some spending – capital projects will be delayed anyway. They could even consider cut current spending – such as a cut in civil service pay/pensions. But, the relatively small amount saved compared to political cost, means it is not really a viable solution.

1 thought on “How can government pay for emergency crisis spending?”