Food prices are typically fairly stable in a recession. If the recession is very deep and it leads to a period of deflation (fall in the general price level) then food prices may fall by a similar amount.

For example, in the great depression (1929-33), we saw a prolonged fall in prices. This was due to a significant fall in aggregate demand. In the US, there was also a fall in the money supply, due to bank failures.

US price level. 1930-33 was a period of deflation (negative inflation) – fall in the price level.

How a recession could cause a fall in prices. Lower aggregate demand (AD) leads to fall in the price level. This would tend to drag prices lower.

Food has a very low-income elasticity of demand. When income falls in a recession, we cut back spending on expensive items like motor cars, but generally keep buying food (unless we are really destitute). Therefore, staple items like bread and rice will not see any particular fall in demand. Therefore, firms may feel less need to cut the prices of food than other goods.

In a deep recession, you might expect a price war to emerge in expensive electronics or motor cars, but we are very unlikely to see a price war emerge for food items.

However, if the recession is deep enough and there is a lack of benefits for the unemployed, then even food will see a fall in demand (like the Great Depression)

Food prices in the great depression

During the Great Depression, food prices plummeted. This was due to a combination of factors, some of which were not related to the recession itself.

“In 1932, in the Imperial Valley alone, 2.8 million watermelons, 1.4 million crates of cantaloupes, and 700,000 lugs of tomatoes were destroyed because they could not be sold” (Encyclopedia.com)

Food price inflation in a recession

It is possible to have food price inflation in a recession. This could occur if we experience cost-push factors, such as bad weather, crop failure or increased price of imports. 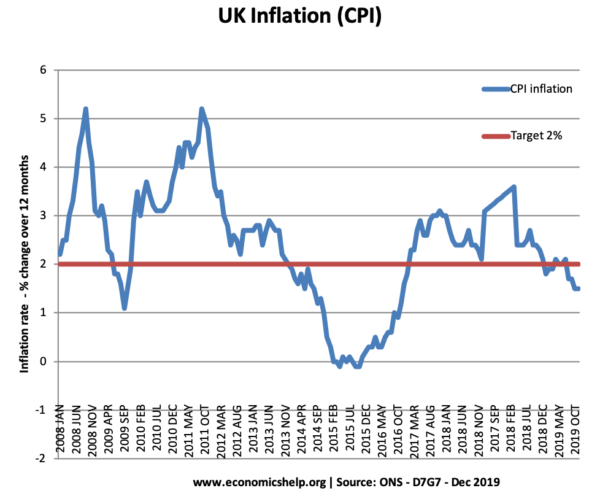 During 2008-12 recession, the UK had periods of high inflation. Inflation reached over 5% in 2008 and 2012. This was due to cost-push factors – depreciation which causes rising food prices.

What will happen to food prices in Covid-19 recession?

There are different possibilities. Firstly, demand for food is falling. This is because the hospitality sector – restaurants and tourism are experiencing a big drop off in demand. Therefore, there is a big fall in demand for food – especially foodstuffs associated with the dining out – such as cheese, dairy and high-end fish.

To some extent, demand is rising in supermarkets to compensate. But, it seems if we don’t go out to restaurants and hotels, the overall demand for food is lower. If we go to a restaurant, we may buy expensive fish and have a cheese course – but at home, we skip on the plate of cheese. French cheese producers are seeing dramatic fall in demand, causing the price of cheese to fall. UK fishermen are seeing a collapse in the price of fish.

Impact on supply. An unknown effect of the corona recession is will quarantine measures affect the supply of food. For example, if farms cannot employ people to pick food, this will cause prices to go up.

Another complication is that whilst recessions often lead to deflation, it is not inconceivable the opposite can happen. For example, if a government responds to falling output by printing money, it is possible this could cause inflation and even hyperinflation. For example, the Zimbabwe government printed money and caused the hyperinflation of 2008. But, even this is not straightforward, in a deep recession you can print money without causing inflation (it depends how much) In 2020, we are creating money, but inflation is still low. See Can you print money without causing inflation?

In a normal post-war recession, the impact on food inflation is fairly muted. With benefits for the unemployed, the demand for food is not really affected and prices stay fairly stable. However, in a very deep global recession, demand for food may fall as people cut back on food purchases (especially the luxury end). This could cause food deflation like 1929-33. At the same time, the impact on food prices depends on several microeconomic factors other than just macroeconomic factors – such as is there oversupply in the market?