However, it is not guaranteed inflation will fall in recession. For example, we could have a period of stagflation – rising inflation and falling output (e.g. after a rise in the price of oil –  1974 and 2008). Also, if countries respond to a fall in output by printing money, then this could lead to hyperinflation (e.g. Zimbabwe in 2008)

Why inflation tends to fall in a recession

A recession means two consecutive quarters of negative economic growth. With falling economic output and rising spare capacity, prices are likely to fall (or at least go up at a slower rate.)

This graph shows the recession of 2009. During 2008 and 09, the inflation rate falls from 5% to under 2%. Inflation increased in 2011 because of cost-push factors (devaluation)

Why inflation can rise during a recession

Inflation may not always fall in a recession.

In this case, the fall in output is caused by fall in short run aggregate supply (SRAS) this leads to higher inflation.

In 2008, at the start of the recession, inflation was running close to 5% – but this was primarily due to cost-push inflation from higher oil prices.

During 2012, there was a double dip-recession with low economic growth, but rising inflation. This was because

Deflation and the Great Depression

In the Great Depression, there was a large fall in output, and this caused deflation. Prices fell quite significantly. 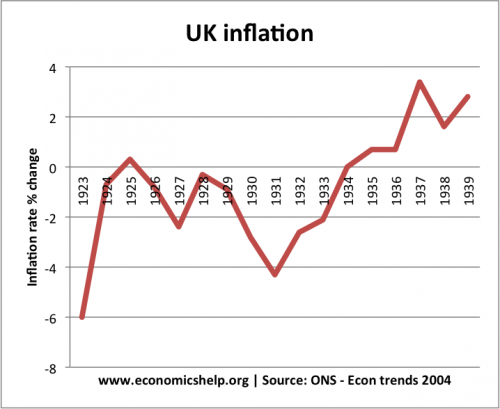 The reason the Great Depression let to deflation was

In the 2020 Covid Recession, the global downturn was so severe that it put downward pressure on oil and energy prices. In Feb 2020, energy prices were rising 2.3%. In March, energy prices fell 3.6% (Fall in inflation)

In 2020, there has been a fall in inflation rate, and there are concerns the depth of the downturn could lead to deflation.

However, the response to the COVID recession will involve creating money which has the potential to increase inflation in the medium term.

6 thoughts on “Inflation and Recession”