During the Great Depression, US unemployment rate rose from virtually 0% in 1929 to a peak of 25.6% in May 1933. This was the equivalent of 15 million people unemployed. Though this unemployment rate also excluded those on reduced hours or migrants/women not eligible to officially sign on for benefits. The unemployment caused serious economic hardship as welfare support for the unemployed was very limited.

The unemployment rate remained in double figures until America’s entry in the Second World War in 1941.

Unemployment and economic growth rate US

During the Great Depression, most countries around the world experienced a rise in unemployment. The rise in unemployment was particularly marked in countries which were reliant on international trade, such as Chile, Australia and Canada (producers of raw materials). Countries which were relatively isolated and self-sufficient often avoided the worst costs of the great depression. Countries, such as Soviet Union, Spain and Japan.

In the US, the worst of the great depression ended in 1933, and unemployment rates started to fall. However, the rate of unemployment remained high in the US, and a second “double-dip” recession in 1936 caused it to increase again.

Why did unemployment rise so much in the great depression?

In essence, with demand for goods falling, many firms went out of business and so made their workforce redundant. Other firms had to cut costs so hired fewer workers. The unemployment was nearly all demand-deficient (or cyclical unemployment.)

1. People who lost money on the Wall Street Crash (1929) started to spend less. Banks lost money from loan defaults and therefore were reluctant to lend money for investment. This started a fall in consumer spending and investment, leading to lower aggregate demand in the economy. With firms seeing a fall in spending, they cut back on output and employed fewer workers. This was particularly noticeable for luxury goods like motor cars.

2. Negative multiplier effect. The initial effect of the Wall Street Crash was fairly limited – most Americans did not have shares so were unaffected by a fall in share prices. But, ordinary people were affected by knock-on effects. With less demand for luxury goods, some manufacturing workers lost their jobs, so they had less money to spend.

3. Fall in money supply and deflation. The great depression began with the shock of the Wall Street Crash. This caused a loss of wealth. It was compounded because many had borrowed to buy shares (called buying on the margin). When shares fell, many investors and ordinary people lost significant sums and went bankrupt. Banks started to see loan defaults and there concerns banks were running out of money. This led to well-publicised ‘bank runs’ with queues of people wanting to withdraw money. Many medium-sized banks went bankrupt leading to people losing their savings. This led to a fall in the money supply and deflation (falling prices). People hoarded cash in their homes.

The fall in the money supply is quite noticeable. Falling money supply led to an inflation rate of -9.3% in 1931 and -10.3% in 1932. When prices are falling this rapidly, it has negative effects.

4. Agricultural recession. As well as jobs being lost in manufacturing and the service sector, the US agriculture was going through a prolonged downturn. A global glut in supply led to lower prices and farming often became uneconomical, jobs were lost in rural areas – leading to a large migrant workforce seeking employment in places like California.

5. Trade war. In response to the fall in world output, countries began raising tariffs to protect domestic industries. For example in 1930, US passed the Hawley–Smoot Tariff, which placed tariffs on 20,000 imported goods. However, this led to retaliation as other countries put tariffs on US exports. Therefore, there was a further decline in trade and new job losses. Some jobs were perhaps ‘protected’ by tariffs, but many more were lost because of higher export tariffs.

6. Wrong policies. In 1930, the US Federal Reserve temporarily raised interest rates to try and protect the value of the dollar in the gold standard. This was a counter-intuitive policy but highlights a problem of Gold standard and trying to protect value of the currency – rather than provide monetary stimulus.

Although nominal interest rates did fall overall from 1929 to 1933 – because of deflation, the real interest rate rose from 7% in 1929 to 15.9% in 1932. (1) Also, governments were reluctant to pursue expansionary fiscal policy but were more concerned at trying to limit the budget deficit. FDR did implement a New Deal from 1932, which included some government-backed investment schemes. This helped to reduce unemployment a little, but compared to the scale of the problem, the New Deal was fairly limited.

UK unemployment during the great depression 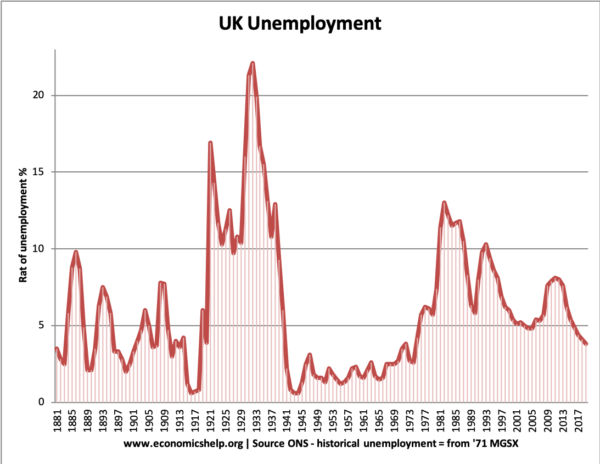 UK unemployment reached a peak of 23% in 1932. Unlike the US, UK unemployment was high – before the great depression. The UK economy was depressed throughout the 1920s due to the Gold Standard, deflation, industrial decline and tight fiscal policy.

Which countries were the most successful at reducing unemployment during the Great Depression?

Germany. The mass unemployment in Germany was a major factor in Hitler and the Nazi party gaining power in 1933. On coming to power, Hitler began a policy of rearmament, conscription and building infrastructure, such as autobahns. From an economic perspective, this interventionist policy led to unemployment falling rapidly from 1933 to virtually 0% in 1939.

Japan. Japan’s Finance Minister Takahashi Korekiyo brought Japan out of gold standard in 1931 (devaluing currency) and ran Keynesian budget deficits, this helped the Japanese economy recover much quicker than the US. In the late 1930s, Japanese nationalists aggressively invested in heavy industry and armaments, causing Japanese industrial output to double in the 1930s.

The Soviet Union. The Soviet Union economy was largely independent of global trade. In the 1930s, Stalin’s five-year plans were successful in increasing industrial output significantly.

1 thought on “Unemployment during the great depression”