We have frequently heard the statement that we are experiencing the worst recession since the 1930s, but data released from the ONS shows that the fall in GDP is actually more prolonged in the current 2008-12 recession than the Great Depression of the 1930s. 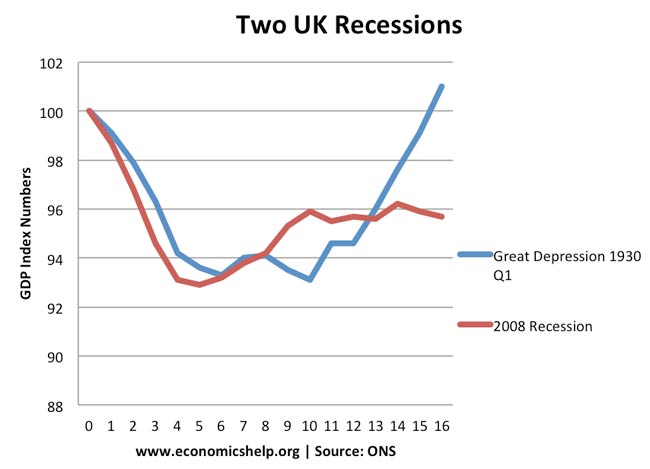 In terms of human misery the Great Depression of the 1930s was far greater. Unemployment in the 1930swas higher and in the absence of a proper social security net, those who were unemployed faced living on the breadline with only a very meagre unemployment allowance.

But, this graph does show that the extent and prolonged nature of the current fall in GDP in the UK.

Statistics from the ONS show that the biggest cause of the continued recession is not the Eurozone crisis, but the fall in construction and mining sector. Government spending cuts are a key factor in causing the fall in construction. For example, the halting of the school building programme. Unfortunately, when governments pursue austerity measures, it is often capital spending which is the easiest to cut – delay road building, delay building schools. Yet, this is the kind of spending which is the most important for economic recovery.

One thing is certain – the government’s claim that spending cuts would provide a boost to economic confidence have proved unfounded.

Exports have been weak. Though the biggest fall in UK exports has been in our trade with the US. Exports to US fell £0.5billion causing most of the fall in exports to non-EU countries. 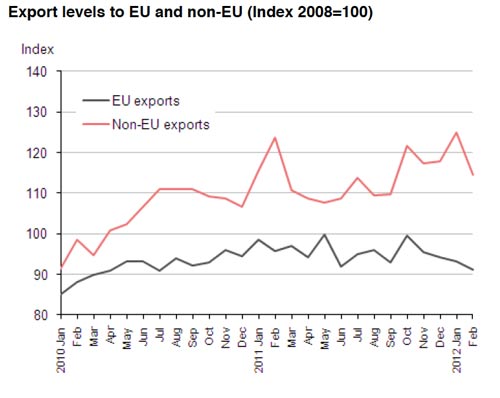 In the Great Depression, the US experienced very significant deflation (fall in prices). Deflation did not occur in 2009-11, although inflation was generally low.