Despite the urgency of climate change and the rapid fall in the price of renewable energy sources, the world still relies on nearly 80% of its energy source from fossil fuels. Accelerating the shift away from fossil fuels will have large environmental and economic benefits, yet progress is much slower than we need. The problem of fossil fuel dependence has also been heightened by the 2022 Ukraine crisis and the desire of Europe to reduce its dependence on Russian oil and gas.

Reducing our dependence on fossil fuels can be helped by individual change, but alone this is not enough, and governments need to make use of carbon pricing, end fossil fuel subsidies and invest in a transition to cleaner energy.

Put a price on carbon

Burning fossil fuels has high external costs in terms of air pollution, health problems and greenhouse gas emissions. The price should not be left to market forces because the market price will be less than the socially efficient level. The government should place a tax on fossil fuels so that consumers and producers pay the full social cost. This will make renewables relatively more competitive and increase the incentive for energy companies to switch. The higher price of fossil fuel energy will also reduce consumer demand. Higher prices of gas will encourage households to reduce the temperature of their central heating and avoid unnecessary use. 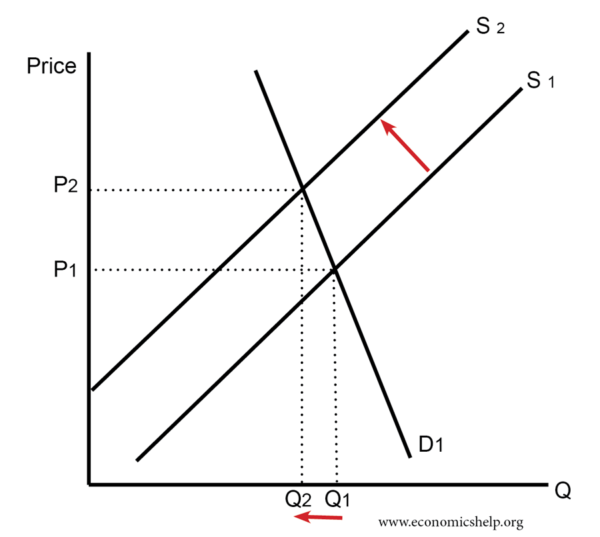 Simple diagram showing how tax on carbon shifts supply to the left and leads to higher price and small fall in demand. This suggests demand is quite price inelastic, which is a reasonable assumption given there are few alternatives.

One of the craziest government policies is the direct subsidy of fossil fuels. The IMF found that the production and burning of fossil fuels, oil, gas and were subsidised by $5.9tn in 2020. (IMF) Subsidies artificially keep fossil fuels competitive and encourage industry and consumers to keep using them.

One of the difficulties in switching from fossil fuels to relatively cheaper renewable energy is that industry and households have considerable infrastructure invested in using fossil fuels. For example, in Europe, most central heating is powered by natural gas. When natural gas spikes in price, it is a considerable investment to switch to alternative energy sources, such as electric-powered heat pumps. An electric heat pump could cost several thousand pounds to install, and this is why it is hard to transition away from traditional fossil fuels. The government could help by insisting new houses are built with solar panels and heat pumps. But, even this would not tackle the majority of households. However, in the long-term, there may be need for more rules about installation of new gas central heating, to make sure the economy starts to transition away from gas.

To some extent changes in the consumer behaviour can reduce demand for fossil fuels. There is certainly more awareness of environmental issues and, especially among young people, there is peer pressure to avoid unnecessary fossil fuel emissions.  For example, just choosing to fly less frequently around the world can have a big impact on reducing fossil fuel emission. Relying on change in personal behaviour can definitely help at the margin, but given the scale of the problem, it is not enough. There is also a free-rider problem with people hoping others make the sacrifice of reducing fossil fuel consumption.

But, attitudes alone are usually insufficient.

The most effective way for me to reduce fossil fuel consumption was not so much a concern for the environment but the arrival of a smart meter.

A smart meter tells you in real-time how much gas and electricity you are using. When you see the electric and gas go around, you soon learn what costs money and which appliances use power. It becomes a game of trying to save money. I have turned down the temperature on my central heating and wear more clothes. It definitely saves money.

Compensation for those affected by renewable energies

In general, people support the greater use of renewable energies, like solar and wind. However, at least in the UK, there is often local resistance to wind farms and solar farms being placed in certain locations. Recently in Cumbria, a Green party councillor got elected by opposing a solar farm. The point is we like renewable energy until we have to look at wind turbines and solar panels on our favourite hill. One solution is to compensate those nearby with cheaper power bills. Personally, I don’t understand why people object to the visual cost of solar panels and wind turbines. When I see them, I see hope for the future of the planet. But, one cost of renewable energy is the higher use of land than more traditional fossil fuels. This is why offshore wind farms will meet with less resistance.