There is no doubt that as the economy emerged from Covid lockdowns in 2021, the world experienced a surge in inflation, not seen since the 1970s. 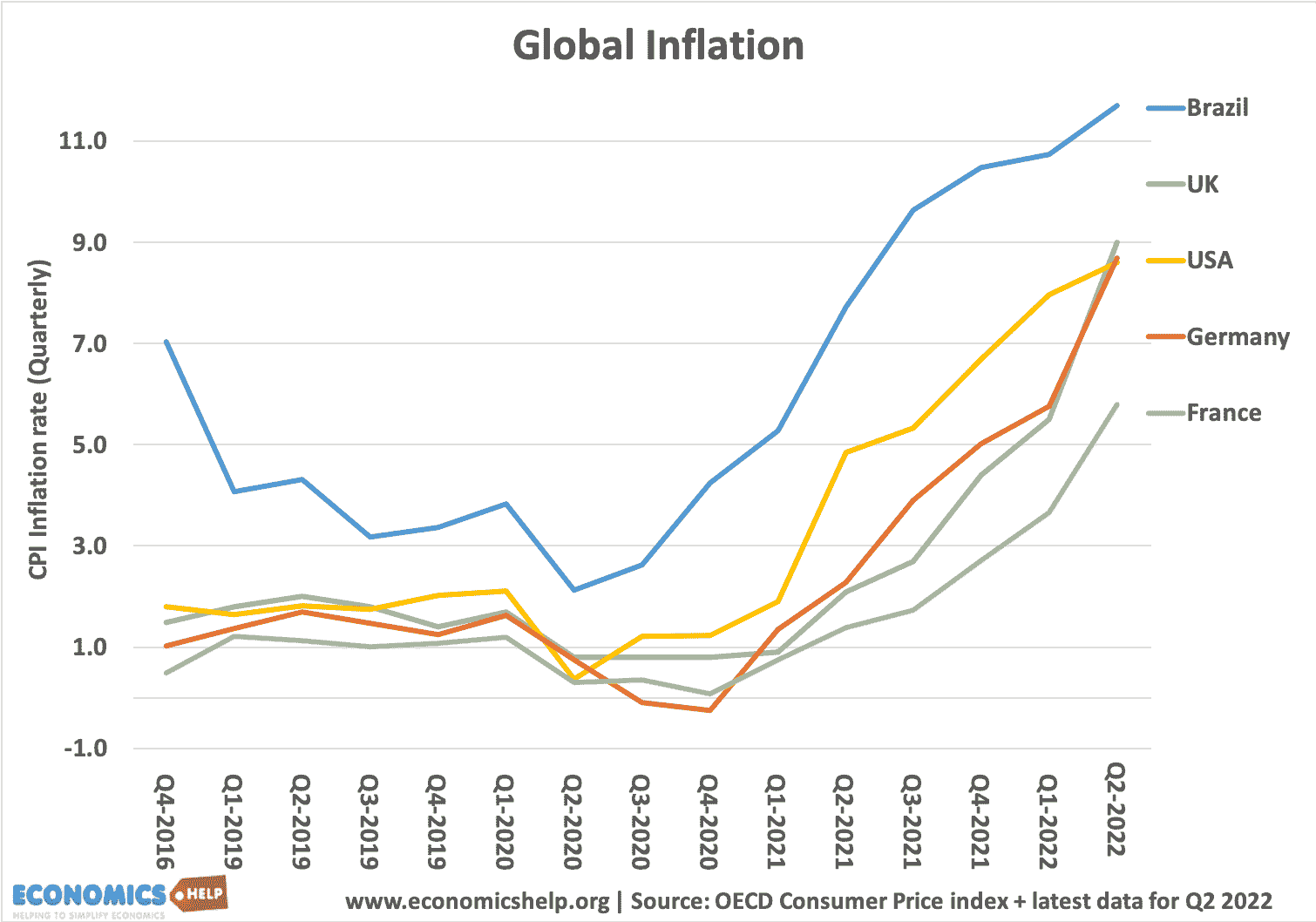 There are many supply and demand factors, which have caused this unexpectedly high inflation.

The first factor is that Covid lockdowns, especially in China and Asia, disrupted global supply chains . When demand returned in 2022, the just-in-time management of supply chains broke down. For example, global shipping saw a rapid rise in prices because there was a shortage of transport shipping in the ports where they were needed. This led to a rise in transport prices for many manufactured goods, which were passed on to consumers.

A key element of Covid is that it caused serious disruption to the economy. In 2020 and 2021, many sectors laid off staff and cut back services. This is especially true in leisure, air flights and hospitality. When customers returned in late 2021 and 2022, firms struggled to return to pre-Covid levels of staffing and operation. This is most visibly seen through large queues in airports across the world as airports struggle to cope with the surge in demand back to pre-2022 levels. When demand is predictable, airports can run on fine margins and can run close to full capacity without major shortages. But, Covid changed industry demand and supply was often not sufficiently elastic to meet the changes.

Another factor behind inflation is the relatively strong demand – especially in the United States. Some argue the generous fiscal stimulus of 2021, where the US Federal government offered a stimulus package of $1.9 trillion in the form of cheques and tax cuts are a big cause of inflation. Combined with previous Trump stimulus packages, the US economy has received nearly $5 trillion in recent years. This compares to the 2008 stimulus package of a modest $787 billion. (Source NBC News)

During the Covid lockdowns, there was a sharp rise in personal savings, as risk averse consumers reduced spending (also at home, there were less things to spend on). When the economy and society re-opened, many households had large savings they could now spend. The result was strong growth in demand and a strong economic recovery with rapid job growth. But, combined with the supply constraints, the result was bottlenecks and higher prices. This contributed to US inflation of over 8%.

However, it would be a mistake to only claim inflation was only due to government spending. Other countries in Europe, without the same fiscal stimulus, have seen very similar rates of inflation. Notably, the UK is experiencing inflation of 8% plus but the economy is barely growing with stagnant/negative growth in the past two quarters. This is partly due to Brexit problems, but an indication inflation is primarily cost-push.

Very reminiscent of the 1970s, a large driving force of inflation in late 2021 and 2022 is the resurgence in oil prices. Although less influential than in the 1970s, Oil prices still have a strong bearing on inflation as higher oil prices have pushed up transport costs around the world.

Oil prices are rising because of higher demand due to the strong global recovery, but also an unwillingness of major OPEC countries to significantly increase output. Oil continued to climb after the Russian invasion of Ukraine in February 2022. Economic sanctions on Russia and the disruption to the Ukraine’s economy have had the effect of reducing the supply of both oil and gas. It has caused not just higher oil prices, but also rising natural gas and wheat prices.

In the UK rising petrol, electric and gas prices, combined with weak sterling are among the main causes of inflation.

Higher wheat and agricultural prices are a key drivers of inflationary pressures in the developing world, where raw commodities and food have a bigger weight to inflation.

During this period of inflation, corporate profitability is rising, with 2020 and 2021, showing record levels of US corporate profit after tax. Total US corporate profit rose from $1.5 trillion in Q2 2020 to $2.6 trillion in Q2 2021. (St Louis Fed) Inflation is an opportunity for firms to increase prices. However, it would be a mistake to see price gouging as a major cause of inflation. It is perhaps more indicative of the distribution effects, with consumers seeing higher prices but wages struggling to keep up.

Another disruption of Covid is to dramatically change the types of goods we buy. Covid saw large falls in the number of people going out. Instead, we saw a large rise in people working from home and purchasing physical goods rather than services. Therefore, we have spent more on heating (working from home) and buying food to eat in. Official CPI measures are calculated using previous weighting systems, which do not account for these changes in consumer behaviour. Therefore, the actual CPI inflation faced by customers may be higher than the actual official measure.

If inflation expectations continue to remain low, it may well be that the current inflation proves temporary. If energy prices start to fall in 2023, then there will be a reverse in this factor behind inflation.

Another effect of both Covid and the experience of Russia and Ukraine may make firms less willing to offshore all production to the lowest-cost providers in China. Firms and governments may value having production closer to domestic markets (especially for goods like pharmaceuticals) – even if we lose out on the disinflationary pressures coming from cheap Chinese goods.

The Covid Pandemic was a cause behind the inflation we see today. It led to unprecedented disruption, especially to production and supply chains. Even when some of these were being eased, we saw the Ukraine war cause another surge in oil/gas prices and more inflationary pressures. The stimulus effects have played some role in causing the US economy to be running with an output gap, but generally, around the world, the inflation we see is primarily cost-push inflation.