The simplest way to reduce immediate cost of living pressures would be to cut taxes on petrol, electricity and gas. This would reduce prices for consumers and help reduce some of the temporary inflation. The advantage is that it could be a temporary tax cut until oil prices fall. Another advantage is that it will help those who rely on car use in rural areas or for their job.

A disadvantage is that these taxes were designed to reduce our dependence on fossil fuels, reduce pollution, combat global warming and also help wean us off energy imports from countries with murky human rights records. A lower tax would reduce the incentives to find alternatives, such as turning down central heating, driving at slower speeds or using public transport. Cutting taxes would encourage continued use, at a time when we need to switch to alternatives. It will help cost of living crisis, but is not socially optimal.

An alternative policy is for the government to give a general grant to help households deal with rising prices. The advantage of this policy is that it could give exactly the same fiscal support to households as an energy tax cut, but keeps the incentive to reduce carbon emissions. It would then be up to households to decide how to use this energy rebate. If they wanted to keep using electricity/petrol they could, but other households may wish to respond to the signal of higher prices and reduce unnecessary carbon emissions and use the energy rebate to help with other bills.

An energy rebate or tax cut could be universal to every household, although the government may wish to give proportionately more to lower-income households. The most effective policy to reduce the worst cost of living crisis would be higher benefits, such as income support. It is the poorest 10% decile who are most affected by the cost of living crisis because around 90% of their spending is on ‘essentials’ which have been hardest hit by rising prices.

From a behavioural point of view, many households may prefer lower prices of petrol to the same fiscal support from an energy grant. This is because we have a sense that petrol at £2.09 is ‘unfair’. Even if we got an energy grant to help pay for expensive petrol, it may not reduce public discontent at the continued ‘unfair’ petrol prices – even though in theory £5 billion of tax cuts for petrol is the same overall effect of £5 billion.

As an alternative to an energy rebate, the government could cut a general tax like VAT or income tax. This would increase the disposable income that could be used to deal with the cost of living. An income tax cut would not benefit the lowest 10% decile as this group tends not to work, but receive state pensions.

How to pay for tax cuts/energy rebates

The other big issue is how to pay for these tax cuts/energy rebates. The government would have three choices

The government has also recently announced a limited windfall tax on excess profits in the energy industry. The government could go further and announce more windfall taxes, plus an increase in corporation tax. As mentioned in profit-push inflation, corporate profitability in the UK and US has increased sharply since 2020. A study by IPPR reports that in the UK “the profits of the largest non-financial companies were up 34 per cent at the end of 2021 compared to pre pandemic levels” 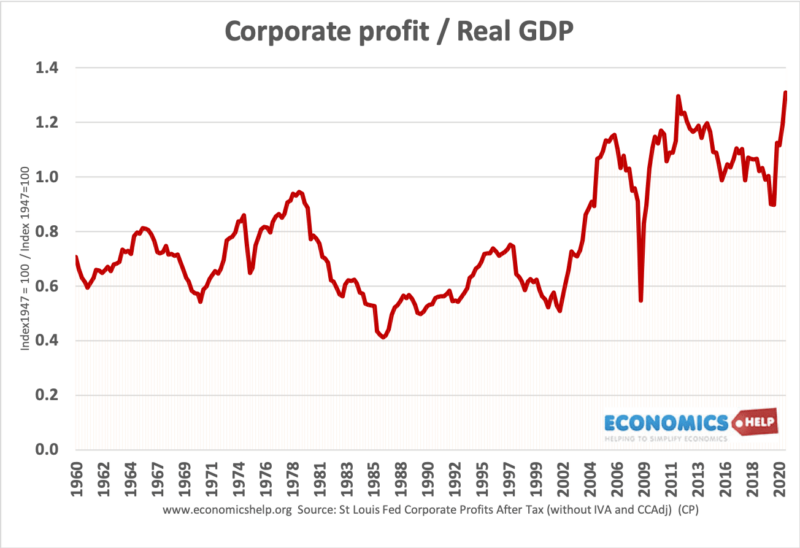 In the US corporate profit/real GDP is close to record levels.

Given that rising oil prices have created winners and losers in the economy. It is important to make more effort to redistribute income so that those who can afford to pay for cost of living crisis make more contributions.

The only drawback behind more corporate tax and windfall taxes is that the big energy companies claim higher taxes will discourage them from investing in new energy schemes, including both renewable energy and new fossil fuel exploration. If investment is cut back because of higher taxes, then this will limit the investment we need in diversifying our energy soruces.

Can a government borrow to solve the cost of living crisis?

Borrowing can also be justified if the economy is slowing down and entering in recession. In that case, there is a classic Keynesian justification for government borrowing to help stimulate demand at a time when private sector spending is falling.

The difficulty is that whilst the economy is slowing down, inflation is still a problem. Higher borrowing to fund tax cuts is reflationary (boosts aggregate demand) and so will contribute towards inflationary pressures. Therefore, it is a tricky balancing act, trying to give fiscal stimulus without making inflation worse.

Could higher interest rates help the cost of living crisis?

Central Banks are slowly raising rates in US, UK and EU. Higher interest rates will choke of demand and reduce inflationary pressures. However, it comes at the cost of lower economic growth and investment. It helps solve one problem (high inflation) by causing another (lower growth and fewer jobs) Also, higher interest rates are a very blunt tool when the inflation is caused by cost-push factors, such as food, oil and gas. Higher rates would not tackle this fundamental cause of inflation. Also higher interest rates will increase the cost of borrowing, e.g. higher mortgage payments and cause additional cost of living problems, especially for those with high debt levels.

The main problem is that a sharp rise in oil and gas prices causes an unfortunate situation of rising prices, and less output. The problem with this cost-push inflation is that it causes a worse trade-off for the government and society

Therefore it limits the opportunity to give easy solutions.

However, given that many are being pushed in to real hardship by current trends, the government should take bold action to deal with the problem. Society does have the wealth to make sure people have enough money to eat and have heating. I would prefer higher energy grants, increase in income support and financed by a combination of borrowing and higher taxes on wealth and windfall corporation taxes.