In the aftermath of the invasion, the Russian Ruble rallied, becoming one of the best-performing currencies in the world. This perplexed many commentators, who assumed sanctions on Russia would lead to rapid economic deterioration. But, the strength of the Russian Ruble masks the underlying reality. The high value of the Ruble was due to stringent capital controls, a collapse in Russian imports and the high price of oil temporarily boosting export revenue. But, behind selective Kremlin statistics, the outlook for the Russian economy in the long-term is very grim.

Russian Oil and Gas in decline

Since the post-war peak of oil in March. The price of oil has fallen back as the shock of the war dissipates. Although there are contrasting forecasts for the price of oil, an economic slowdown in US, China and Europe will add downward pressure on oil prices in the coming months. Also, although Russia is a major player in oil production, other countries have indicated a willingness to increase supply.  Since the war begin supply from global strategic reserves have increased oil supply by 240 million barrels – exceeding that lost from Russian supply. US natural gas production is also at record highs, and fears over oil prices have encouraged President Biden to allow more oil drilling in the Gulf of Mexico and Alaska.

Whilst oil prices fall, more concerning for Russia is that its much-vaunted ‘pivot to the East’ has many limitations. Firstly, due to geopolitical isolation and western sanctions, Russian oil is trading at a $35 discount from Brent Crude Oil. China is buying more Russian oil, but it is extracting a steep discount. During the invasion of Crimea, the discount never exceeded $5. For a high-cost producer like Russia, this discount is seriously reducing its profit margins. The plan by Janet Yellen to cap the price of Russian oil at $40 to $60 would further reduce margins, especially since the Chinese would probably seek to use its monopsony buying power to reduce prices even further.

In Europe and Germany, there are genuine concerns about the prospect of Russia cutting back on natural gas supplies over winter, already Europe has planned to cut consumption. However, whilst the Kremlin flexes its muscles at the ability to hurt European economies (and Germany in particular), Russia needs its gas exports more than other countries need Russian imports. In 2021, 83% of Russian gas exports went to Europe, but Europe imported only 46% of its energy from Europe.

Already, imports of LNG from US have exceeded piped gas imports from Russia. This is quite a dramatic shift. It shows the supply of natural gas is more elastic than we may first think.

For Russia the problem is that the long-term forecast for oil production is now poor. It is no longer trusted as a reliable source of energy and the invasion of Ukraine will only accelerate demand away from Russian oil and also to renewable energy sources. Russia will also struggle to invest in new capacity, as previously it has relied on partnership with western multinational who have the technical expertise.

Russia is hoping that China will be a major supporter of the Russian economy. But, whilst China is by far the biggest source of Russian imports ($72 billion a year) compared to the 2nd largest Germany of $27 billion (2021). Russia is only a very minor component of Chinese exports. (In 2021, China exported $506 billion to US, but only $72 billion to Russia). The result is that Chinese companies, although not subject to any sanctions have been voluntarily cutting back on exports to Russia because they don’t want to be subject to US sanctions. It is estimated that Chinese exports to Russia fell from $8 billion (Jan 2022) to $4bn by April 2022.

Putin hoped that gas and oil exports could pivot to China and Asia, but in practice, there are real difficulties in exporting to China. By sea, oil takes 37 days, much slower than any other source. Natural gas is even more difficult, with no real existing pipelines ready to offset the fall in European exports. Europe really is the obvious export partner of Russia, all the infrastructure is set up for this. But, given the invasion of Ukraine and the perceived unreliability of Russia’s pro-Kremlin energy companies, it is only a matter of time before Europe cuts off all Russian imports of gas and oil.

Another big threat to the Russian economy is how European sanctions are hitting Russia’s ability to import key components and high-tech parts for a range of industries from cars to electronics. This fall in imports is leading to a fall in retail sales and is likely to get worse. It has important ramifications for industries like aeroplanes where Russian carriers, such as Aeroflot are no longer able to gain support and repairs from Boeing, causing aircraft to become increasingly unsafe.

Dutch disease is a term given to an economy which becomes over-reliant on commodity exports, causing the rest of the economy to stagnate and be crowded out. 60% of the Russian government’s budget comes from oil and gas revenues and so there is has been little investment outside energy. Also, the corruption endemic in these industries further reduces the incentive for innovation and investment in other industries. The problem is that this makes it hard for the Russian economy to be independent and self-sufficient. It lags in key components and has been hard hit by sanctions. 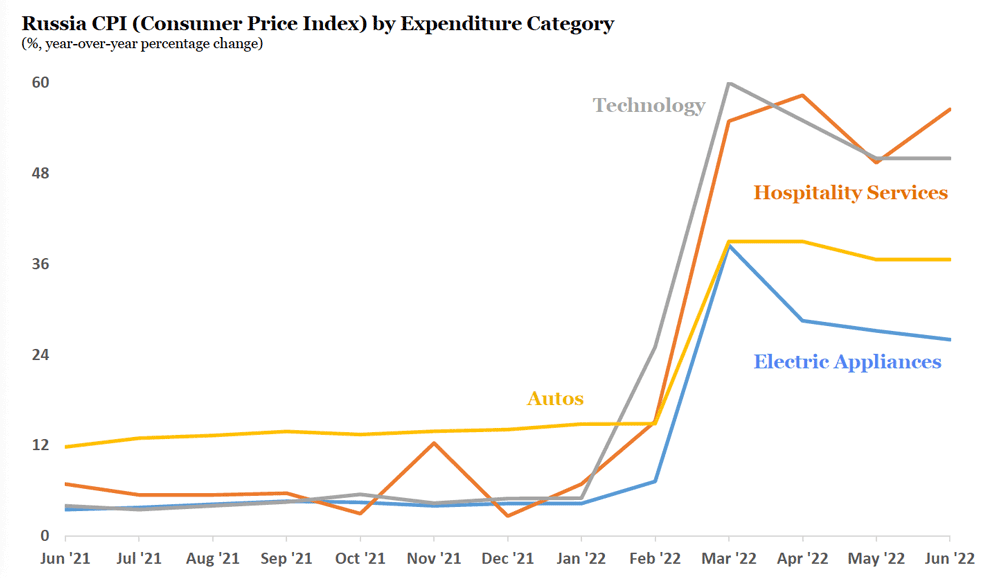 Whilst the official level of the Russian Rubble has been artificially propped up, the real price of imports has increased by up to 60% in sectors, reliant on western imports. Whilst the official inflation rate suggests 20%, the actual price rise being felt is much greater. The efforts of the Kremlin to increase liquidity have seen the Russian Money Supply (M2) rise from $620bn in early 2022 to $1,100 in July – hinting at future inflationary pressures.

To cope with high inflation, rising unemployment and a drop in business confidence, the Russian government has significantly increased spending on infrastructure and social security. It has led to Russia drawing down on its foreign currency reserves. Reserves which stood at $640 bn in March 2022, no falling to an estimated $580 bn. But, this $580 bn includes the $300 unreachable due to US and European sanctions. A Russian budget deficit is much more problematic than usual because Russia has been completely cut off from international capital markets.

A decline in foreign investment.

Following economic liberalisation in 1990, foreign investment poured into Russia. It is estimated by Yale CELI that 40% of Russia’s GDP is related to foreign investment with five million jobs dependent on it. Whilst foreign multinationals have retreated from Russia, so have the best educated, richest and most mobile young workers. An estimated 0.5 million Russians have fled the country, including 15,000 ultra-high worth individuals with wealth over $30 million. This is 20% of Russia’s elite. A popular destination has been Dubai with the Dubai property market souring as Russian ex-pats seek to find alternative places to hold wealth.

Why the Russian Ruble appreciated after sanctions

The Myth of Putin as World Energy Czar Fortune.com

Sonnenfeld, Jeffrey and Tian, Steven and Sokolowski, Franek and Wyrebkowski, Michal and Kasprowicz, Mateusz, Business Retreats and Sanctions Are Crippling the Russian Economy (July 19, 2022). Available at SSRN: https://ssrn.com/abstract=4167193 or http://dx.doi.org/10.2139/ssrn.4167193