Since Q1 2009, UK house prices have risen from £149,709 to £270,452 (Q2 2022) – an 81% increase. yet, during that period, median average wages have grown by just over 5%. The two main reasons are limited supply and ultra-low interest rates. Yet, this summer marked a turning point, with higher inflation causing Central banks to consider significant increases in interest rates.

Whilst interest rates were set to rise, the disastrous mini-budget of Truss and Kwarteng caused interest rate forecasts to soar as markets sold bonds and caused rising rates. This was a psychological blow to the housing market as potential buyers realised future interest rates were likely to rise significantly. At the worst point of the mini-budget crisis, markets were pricing in interest rates of 6.5%. However, since the U-turns on tax cuts and the arrival of new PM Rishi Sunak, markets have, at least, temporarily been calmed as they expect Sunak to be more fiscally conservative. Interest rates have fallen back to 5.5% with the prospect of lower interest rates by the end of 2023. Yet, even though it is less damaging, it still represents a large increase in mortgage payments – exacerbated by the high mortgage values.


Looking at House prices to earnings ratios in the UK, we can see that the ratio of house price to earnings is reaching record levels (7 times earnings). It is worth bearing in mind traditional mortgage multiples (the amount banks would lend are around 3-4 times income)

Of course, there is a large variation in house price to earning ratio by region. With London house prices around 11 times earnings. Whearas in the north, house prices are still a more reasonable 4.4. 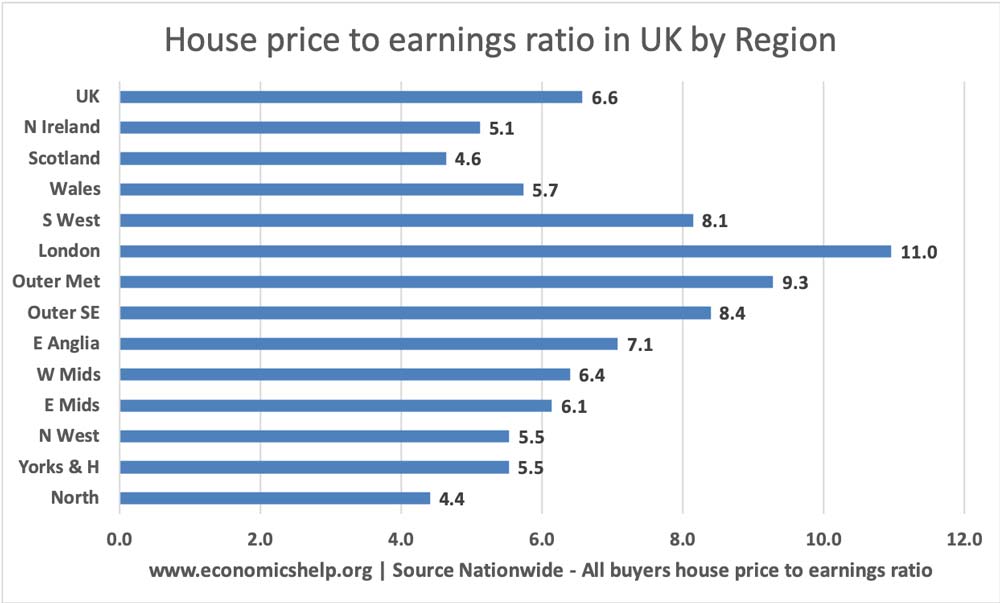 However, although the income-earning multiples are well above long-term averages. A more reliable guide to affordability is to look at mortgage payments as a share of income – especially for first time buyers. The mortgage affordability will depend on both

The ultra-low interest rates are what have kept house prices rising so much faster than wages. If you can get a mortgage, it has often been cheaper than renting.

On it’s own there is nothing particularly concerning. But, if interest rates rise to 5.5% Then mortgage payments as a % of take-home pay will rise to 45% – a level not seen since before the 2008 crash in prices.

This is definitely a warning sign that house prices are set to fall in 2023.

For example, for a £270,000 25 year mortgage a rise in interest rates from 2% to 6% would cause monthly payments to rise from £1,144 to £1,740 – an increase of £596. Not every household will face this kind of interest rate shock and it will take time for fixed-rate mortgage deals to end. But, a key factor for housing demand is new buyers coming onto the market and as mortgage deals rise it can easily become unaffordable.

A key issue for the housing market is the state of the economy. It is not just about interest rates but wider issues like the cost of living, economic growth, employment and disposable income.

If the economy continues to grow, inflation comes down and real wage growth restarts, we would expect to see only a modest decline in house prices. However, there are reasons to be pessimistic about the state of the UK economy in 2023.

The whole of Europe is heading towards recession – caused by energy shock, rising interest rates and the uncertainty around the Ukraine War. If the European economy goes into recession it will likely have an adverse effect on the UK economy. Despite Brexit, there is still a close link with the wider European and global economy.

Many of the factors hurting Europe are also affecting the UK economy. Households face an unprecedented squeeze on living standards, due to negative real wage growth, and high inflation.

The worst squeeze will come from low-income groups who cannot afford to buy a house, and so will not directly affect the housing market. But, there are predicted falls in real income across the board.

This decline in real income will lead to lower economic growth – in fact, recession is very likely. Also, with falling real incomes, prospective buyers will be deterred from taking out a new mortgage – especially with rising interest rates.

Renting has gotten more expensive – a near 40% rise since 2005. This does create an incentive to buy rather than rent. But, this will have little direct effect on house prices in 2023.

Zoopla report a sharp fall in demand for new houses in September. This is to be expected given the dire news resulting from the mini-budget. But, it also shows demand weakening over the summer of 2022. Given the worst of the mini-budget effect is over, will demand return? I’m not convinced for a few reasons.

It was a psychological shock and even if interest rates rise to ‘only’ 5.5% it will be a big decline in affordability.

Although the government have lessened the pressure on interest rates – the opportunity cost is that we may be entering a new era of fiscal austerity – a combination of higher taxes and spending squeezes (probably including public sector pay). This is fiscal drag will be another downward impact on economic growth and demand for housing.

House prices fell in October 2022 and this is likely to precipitate a downward trend. Bear in mind, that there will be a significant time delay in factors such as higher interest rates feeding through into buyer demand and house prices.

Given bad news on housing, it will also cause investors to re-evaluate their view of the housing market. In the past 15 years, buy to let has been a very profitable investment with rising prices and low mortgage costs. This has helped inflation prices above the long-term value, but with the market turning, investors may take the opportunity to sell or at least halt further purchases, causing a speculative decline.

Some housing analysts point to the long-term trend of the UK (and global) housing market to buck dire predictions and despite frequent predictions of house prices falls, house prices continue to rise. In the very long-run, there is a strong case to be made that UK house prices will continue to become more expensive with political difficulties in building new houses needed to meet a growing number of households.

Compared to the financial crisis, there are two positive impacts, households don’t have quite as much personal debt and there is improved credit quality of mortgage buyers.

How did we end up with a broken Housing market?