Within these national figures, you can also see regional differences e.g. the difference between wages in London and south Wales.

But, the striking thing from the wage rates is the economic incentive for people in Eastern Europe to seek employment in countries such as Germany, France and UK. A Hungarian worker could earn in one year in the UK, what might take four years in Hungary.

Free movement of labour can cause large flows of people from low income to high income regions. 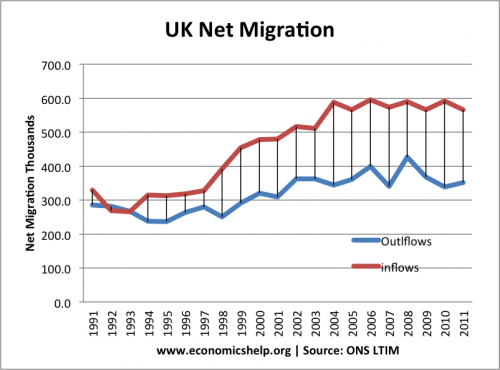 Large net flows of people cause infrastructure problems. The UK has seen a rise in population of 0.5 million in past year – approx 75% of this increase is due to net migration (though this includes both EU and non-EU). (link). There is concern that a rapid rise in population places strain on public services – health, education and housing.

In theory, a rising working population should directly increase GDP, leading to more tax revenues which can be used to spend on improving public services. (Migrants are net fiscal contributors). However, in the UK, the net migration has occurred during a period of restrained public spending. Real GDP per capita growth has been low, and the government have been committed to cutting aspects of public spending. Therefore, the rise in population has put pressure on public services, with people feeling that public services, like the NHS have been under pressure because supply hasn’t met the growing demand from rising immigrant population.

However, see: NHS and immigration for evaluation of this point.

Large net flows exacerbated housing crisis. The UK has a housing crisis – demand is growing faster than the ability (or willingness) to build new houses, the result is house prices and rents have been rising faster than prices and wages, increasing living costs. The large net flows of migrants has not caused this housing crisis, but the additional flows of people has exacerbated the gap between supply and demand. In theory, more houses could be built to deal with rising demand and population growth. But, this is complicated by the fact UK has limited land it is willing to give up for building, e.g. protests against building new houses on greenbelt land.

Even if public services and housing increased to meet supply, you could argue a rising population leads to a decline in quality of life because it increases population density and congestion. For example, in the UK, there is limited land to build new roads (without going through the countryside). Therefore, a rapid rise in population due to the free movement of labour will contribute to more traffic congestion, which has both economic and social costs.

On the other hand, higher population densities can have some benefits.

Downward pressure on wages. The argument is that, if you allow large net flows of workers from low wage countries, these workers will be willing to bid down wages and the increase in the supply of labour will lead to a fall in wages of native-born workers. This is particularly the case for unskilled workers who are closer substitutes for immigrant labour.

However, this is complicated.

“Empirical research on the labour market effects of immigration to the UK finds little overall adverse effects of immigration on wages and employment for the UK-born…The less skilled are closer substitutes for immigrants than the more highly skilled. So any pressures from increased competition for jobs is more likely to be found among less skilled workers. But these effects are small” (Manacorda et al, 2011; Dustmann et al, 2005, 2013; Nickell and Saleheen, 2008). (Centre for Economic Policy)

The other complication is that since 2008, we have seen stagnating productivity and real wages in much of Western world. This is due to several factors, such as more flexible labour markets, the rise of globalisation, and recession making it easier for firms to stop wage increases. Therefore, it becomes hard to distinguish whether stagnant wage growth is due to the effects of net migration or more general economic trends.

“Brain-Drain” Developing countries may lose their best skilled labour. Workers may be attracted to developed countries with higher wages, making it difficult for developing countries to retain skilled staff. This could harm economic development in developing countries. For example, an estimated two million Poles have emigrated to Western Europe (primarily UK, Germany, Ireland) whilst retaining resident status. This means Poland has lost a significant part of its most educated and dynamic workforce. This ‘brain-drain‘ leads to various costs

Labour cannot be treated as a factor of production. In a boom period, immigrants are often welcomed (or at least tolerated) but in a downturn protectionist sentiment often turns against foreign workers and foreign workers may be first to be discarded. But, in reality, it is not so easy to ‘return home’ There are many geographical immobilities.

Immigration may mask the shortage of skilled labour. Immigration may prevent wage inflation but, it could also make a boom more long lasting and help to hide the inflationary pressures in the economy. Therefore, it delays the boom and bust.

Not a Pareto improvement

Many studies show that net migration gives net economic benefits, and is actually a net contributor to tax revenues. But, if that is the case, why is it so unpopular? One reason is that although net migration may cause a net national benefit, some groups of workers and some regions may well be adversely affected.

For example, if net migrants contribute to improved finances, there is no guarantee that a government will spend the money on improving public services in areas where there has been the sharpest increase in migration and population. The effect is that although government benefits from net contributions, people in the South East (a region of high migration) see the relative quality of public services decline.

Non-economic issues. This is mainly concerned with economic issues, but undeniably important is the perceptions of people who feel overwhelmed by large influx of people with different cultures changing the nature of the area. This resentment at rapid immigration is not a new phenomenon. The UK experienced worse after the 1960s immigration from the Commonwealth. Migrants tend to become absorbed into communities over time. However, it is the rapid influx of people into an area that people can find unsettling – especially if there are existing social problems, such as poor housing, high unemployment and crime.

Free movement of labour in the EU 28 has seen very rapid changes in population. This can lead to real economic costs, especially if the government is unprepared to deal with rising populations in particular areas. The other difficulty is separating potential economic and social costs of free movement from more underlying issues, such as infrastructure challenges.

6 thoughts on “Problems of free movement of labour”