Labour shortages occur when employers struggle to fill labour vacancies because of insufficient labour applying for the jobs.

Labour shortages can occur in geographical regions or in occupations with special requirements in terms of skill or function. Labour shortages can also be seasonal in industries like retail (Christmas) and agriculture (harvest time). Recently, since Brexit the UK has experienced significant labour shortages, especially in low-skilled industries. This has led to both advantages – rising wages in some of these industries, and drawbacks – shortage of goods and under-provided services.

The first economic effect is that if supply of labour falls, we should see rising wages. This is basic supply and demand, and in industries, we quite acute labour shortages, we have seen signficant wage rises. Examples, include lorry drivers, fruit pickers and. It is worth noting in industries with acute labour shortages, firms are to some extent able to pass the higher wage costs on to consumers, in other industries, firms are facing squeezed profit margins.

Fall in supply of labour leads to rising wages 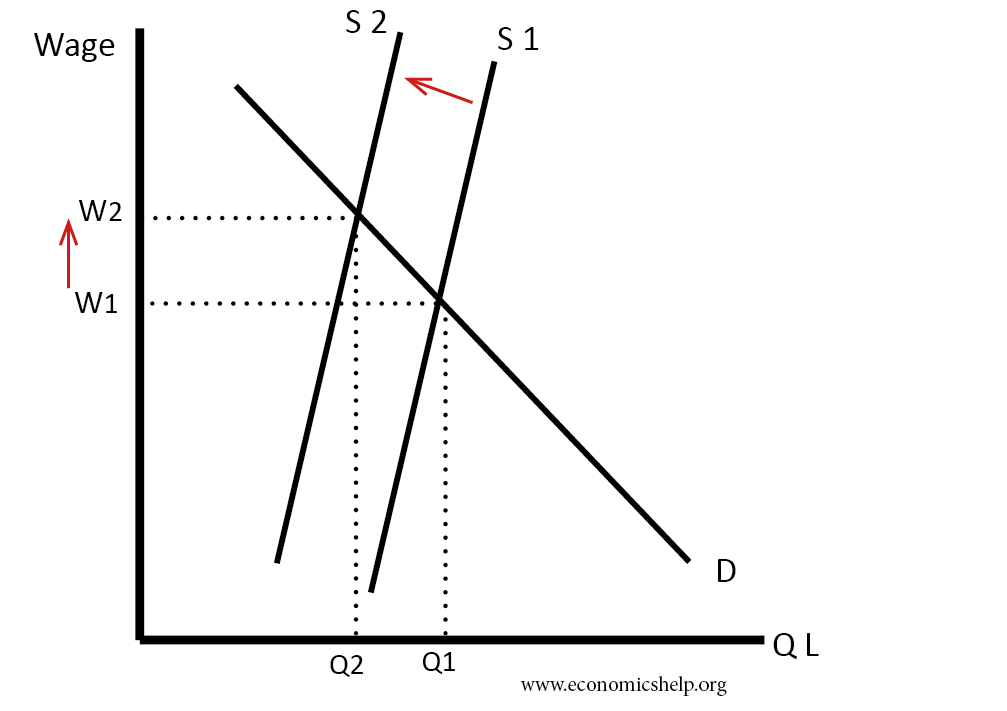 If supply falls, this puts pressure on wages to rise. The basic economic response to a labour shortage is for firms to increase pay to attract more workers. If you ever wondered why it cost £60-£100 an hour to hire a plumber, it is partly due to the relative shortage of labour. In a free market, we will see higher wages in professions, such as lawyers, where there is a limited supply.

However, we also see jobs, which have in the past routinely experienced labour shortages but wages remain close to the national minimum wage.  (e.g. food processing, farm worker, care home worker)

Raising pay is only one possible response to labour shortages. Other responses could be

It suggests ‘increasing pay to attract more UK-born nationals’ is quite low down on the list (7%) of possible responses.

Prolonged labour shortages can have an upward effect on wages. Over time, higher wages will start to feed into higher inflation (both cost-push and demand-pull pressures) The impact on inflation depends on:

Labour shortages can increase the tendency for firms to look abroad for willing/skilled workers. If you have a shortage in nursing, it is very difficult to increase UK supply. Even higher wages would have little impact in the short-term. Encouraging migration from other countries is the easiest way to attract nurses to fill immediate shortages.

There is no guarantee that a shortage of labour will be solved by the free-market. If the economy is close to full employment, even a modest rise in wages may be insufficient to attract workers to the job. For example, wages have risen for meat-processing plants, lorry drivers and fruit pickers, but in the UK, most native born workers do not like the idea of working there. The result is both partial rising wages and prolonged shortages of the good/service. Hence some goods have remained undelivered and there is real concern that care homes will be unable to provide the necessary amount of labour.

Some may argue that migration is a short-term fix to labour shortages. If migration is stopped, it will force an economy to deal with labour shortages by training relevant workers.However, limiting migration may not be enough. Lower levels of migrants don’t necessarily lead to increase in the number of trained nurses, builders and plumbers. There are also structural factors behind why people choose or don’t choose training qualifications. There could also be a period of shortages because it would take time for the labour market and educational institutions to respond to the labour shortages.

3 thoughts on “Effect of Labour Shortages”