Energy and food prices are removed because they have tendency to be highly volatile.

This graph of Core CPI and CPI in the US shows how volatile CPI can be.

This clearly has policy implications. If we look only at CPI, monetary authorities may be inclined to change interest rates more frequently. For example, in 2008, we had a rise in energy prices causing cost push inflation of 5%, a few months later we were in deep recession. In other words CPI can give a misleading impression of underlying inflationary pressures. If you tighten monetary policy because of temporary food and energy inflation, you create potential for slowing down economy. Similarly when there is a slump in energy and food prices, there is a danger monetary policy can become too lax, creating future underlying inflation.

It is true that consumers have to face rising food prices and rising energy prices. I don’t suggest indexing linking pensions to Core CPI. This could give pensioners an increase in benefits less than there cost of living.

There is a danger temporary cost push inflation could lead to higher inflation expectations. But, this is not convincing.

The CPIY is the same as the CPI except that it excludes price changes which are directly due to changes in indirect taxation (such as the increase in air passenger duty, which came into effect from 1 November 2010).

Clearly it is also important to strip away tax changes to get an understanding of the underlying ‘core’ inflation. Tax increases tend to be a one off so will not affect the price level next year (unless the chancellor raises the VAT by 2.5% every year) 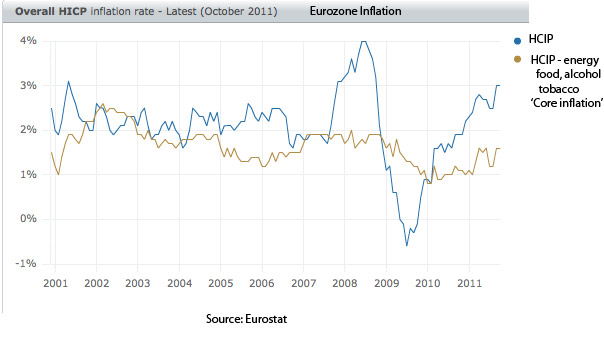 2 thoughts on “Difference between CPI and Core CPI”