The importance of interest rates

If the economy is growing too quickly then we start to get a positive output gap (sometimes referred to as ‘overheating’. It is a situation where aggregate demand (AD) is growing faster than productive capacity (LRAS). Therefore, firms start to put up prices – causing inflation. Inflation is considered undesirable because it creates uncertainty and the inflationary growth is likely to be unsustainable.

Effect of higher interest rates – if the economy is close to full capacity.

One aim of monetary policy is to avoid a hard-landing

For example, if interest rates rise too rapidly then mortgage holders may be unable to afford mortgage repayments – this can lead to default home repossession and a big negative impact on consumer spending.

Between 1992 and 2007 Central Banks appeared to keep inflation low – enabling a long period of economic expansion. However, low inflation masked a credit bubble. Also, the US probably made a mistake of keeping interest rates very low in 2003 – when the economy was growing very quickly. The ultra-low interest rates of 2003/04 encouraged homeowners to take out big mortgages (often on poor credit history). This contributed to housing and mortgage lending bubble.

Interest rate cycle in the UK

In 1979, the government increased interest rates to 17% to reduce inflation. Inflation fell – but it caused the recession of 1980/81. 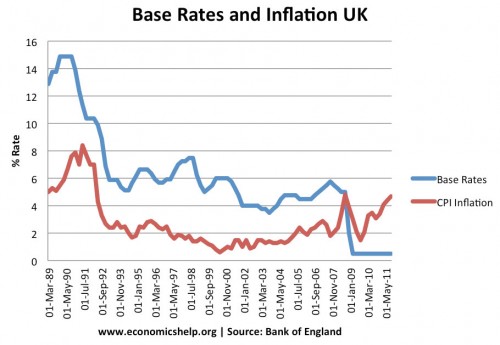 When the UK left the ERM in 1992, the Government were able to cut interest rates; this was necessary because the economy was in a recession. Interest rates fell to 5% in 1995. Since 1995, average interest rates have been much lower.

The Taylor rule is a rough guide to monetary policy. It suggests that if inflation rises 1%, interest rates should rise 1.5%

For example in the 1970s and early 1980s – interest rates were very high – but this partly reflected the higher rates of inflation.

The UK has often experienced ‘boom and bust‘ economic cycles. It was argued governments would often cut interest rates before an election to boost growth. But, this would cause inflation and after the election, interest rates would be raised. This was known as the ‘political business cycle’

In 1997, the Bank of England was made independent and given the responsibility for setting interest rates.

Between 1997 and 2007, UK interest rates were fairly steady, the interest rate cycle has been less volatile. This period was known as the great moderation.  It seemed the Bank was able to keep inflation on target and there was less need for drastic interest rate changes

In 2008, the global credit crunch precipitated a serious balance sheet recession. GDP fell sharply. In response, the Bank of England cut interest rates drastically to 0.5%. However, even this interest rate failed to boost demand and the economy remained stuck in recession. Therefore, there was a prolonged period of interest rates close to zero from March 2009. (liquidity trap)

This prolonged period of zero interest rates (0.5% is often considered ‘virtually’ zero) suggests an end (at least temporary) to the interest rate cycle.

This prolonged period of zero interest rates has led to negative real interest rates. This means savers are seeing a fall in the value of their savings.

Prospects for economic growth in 2018 appear good. Economists have been revising growth rates upwards. The Eurozone in particular, has been exceeding past performance. The strong global growth is causing a rise in commodity prices, and for the first time in a decade, inflationary pressures may start to rise. Though wage pressure is still relatively muted – depsite low unemployment rates in UK and US. However, with US fiscal stimulus, economic growth may continue in 2018, and this could raise prospect of higher rates in UK and Eurozone.