The misery index (sometimes known as the Economic Discomfort Index EDI ) is simply the sum of the inflation rate plus the unemployment rate. The higher the combined score, the worse the economic situation.

The Misery index was developed by economist Arthur Okun.

Where Unemployment rate (ut) and the current inflation rate (πt)

The Misery index was popularised in a Wall Street Journal Article in 1971 – during a period of rising inflation and unemployment – after the long-period of post-war economic stability.

Mr. Okun constructs a “discomfort factor” for the economy. It is derived by simply lumping together the unemployment rate and the annual rate of change in consumer prices—apples and oranges, surely, but it is those two bitter fruits which feed much of our economic discontent […]. The higher this index, the greater the discomfort—we are less pained by inflation if the job market is jumping, and less sensitive to others’ unemployment if a placid price level is widely enjoyed … (Janseen, 1971)

Importance of the Misery index

Although the Misery Index is a rather blunt and simplistic tool, it has been used to predict social issues, such as crime, poverty, suicide rates and even election results.

Since the original misery index, other economists have sought to develop the misery index by adding other measures of economic data – such as economic growth, interest rates and government debt.

A more dynamic approach has been to look at cyclical unemployment related to the output gap and unanticipated inflation – which imposes higher costs than expected inflation.

Limitations of the Misery Index

In an attempt to broaden the scope of the original Misery index other economists have taken Okun’s original idea and added other economic statistics.

In 1999,  Barro developed a misery index based on changes in inflation, economic growth and interest rates. Barro developed this index to measure the relative performance of the economy during presidential terms.

Steve Hanke developed a misery index which was based on

Misery index in US 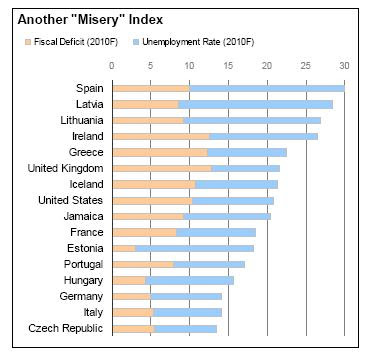 This adds government debt to the misery index.

2 thoughts on “The Misery Index”