Different transport modes have a habit of being replaced. The horse and cart lasted uncontested for quite a few centuries. But, in the eighteenth century, the advent of the canal opened up a whole new mechanism for transporting large quantities of goods. It was the canals that helped Britain’s manufacturing base become a world leader. However, just as the canals were becoming worked to full capacity, along came a new rival, the railroad. The railway made quick long distance travel a reality for many people. Both goods and people could now be easily transported across the country. Now journeys were measured in hours rather than days. The train soon led to the demise of the stagecoaches and the slow canal system. In the nineteenth century, the railway was king and in the UK, we built railway lines to every small town big or small.

Yet, the railways monopoly was soon to be challenged by the internal combustion engine. Cars and buses proved to offer greater flexibility and, at least over shorter distances, greater speed. In the first half of the twentieth century, rails dominance gave way to the car, slowly at first and in the post war period with greater speed. In the 1960s, train-spotting may have been the most popular hobby for young school boys, but adults who could afford it wanted a car. Why be the slave of a train timetable, when you can get to work quicker and faster in the car?

In the 1960s, railways had already been closing, but a special report by Dr Beeching recommended the large scale closure of over 10,000 miles of railway lines. The 1960s was a time of progress, anything new was good, anything old needed to be knocked down in the ‘white heat of technology’. Few mourned the demise of the railway; perhaps some complained about losing their local railway, but the truth is even those who complained were probably using their car rather than the train.

When asked in 1981, if he regretted his policy, Dr Beeching only replied that he wished he had gone further and closed the East Coast main line north of Newcastle – as no-one would really have minded apart from those who lived in Berwick-Upon-Tweed.

You feel if Beeching hadn’t closed the lines in the 1960s, Mrs Thatcher would have in the 1980s. But, ever desperate to cut costs and increase revenue, the last throes of the Conservative government forced through rail privatisation in the mid 1990s.

Rail privatisation was supposed to re-invigorate a dying industry. No longer would we have the stale British Railways sandwich, we would have Virgin comfort, speed and quality of customer service. A few sandwiches may have been nicer, but generally privatisation has failed to end the long suffering problems of the British railways. But, rather unexpectedly, the last decade and last few years have seen an upsurge in use of trains. More people are using the trains since the 1920s. We now long wistfully at long closed lines and think why did we do that? 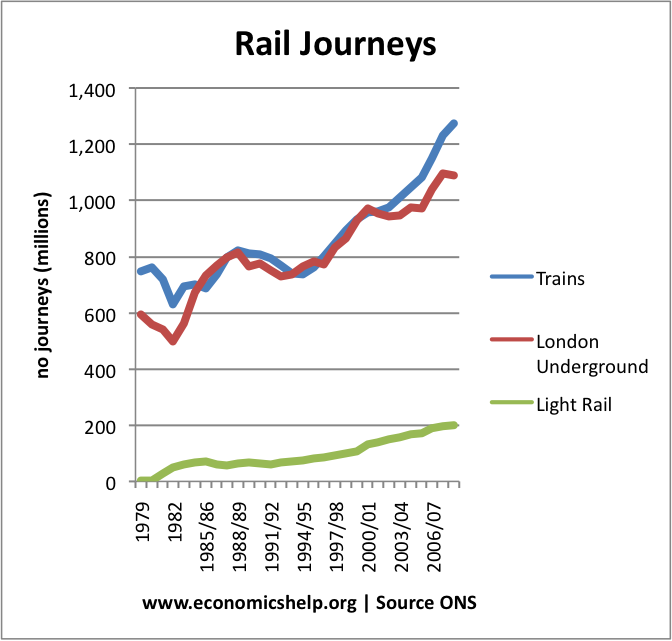 Therefore, after years of decline, the train has, like a phoenix from the ashes, risen from the dead. Despite overcrowding, despite expensive fares, despite enduring time delays and cancelled trains, there is a strong demand for trains. It doesn’t take much imagination to consider that if trains were a little cheaper, more frequently available and not subject to overcrowding there would be even more scope for growth and remove traffic and congestion from our roads.

5 thoughts on “Popularity of Rail Travel”