A recession is a period with a significant decline in economic activity characterised by falling GDP, rising unemployment and a decline in real incomes.

Definition of recession in UK and EU

In the UK and EU a recession is defined as a period of negative economic growth for two consecutive quarters. This means there is a fall in national output and national income for six months. Invariably the fall in GDP will involve higher unemployment, lower retail sales and an increase in government borrowing. 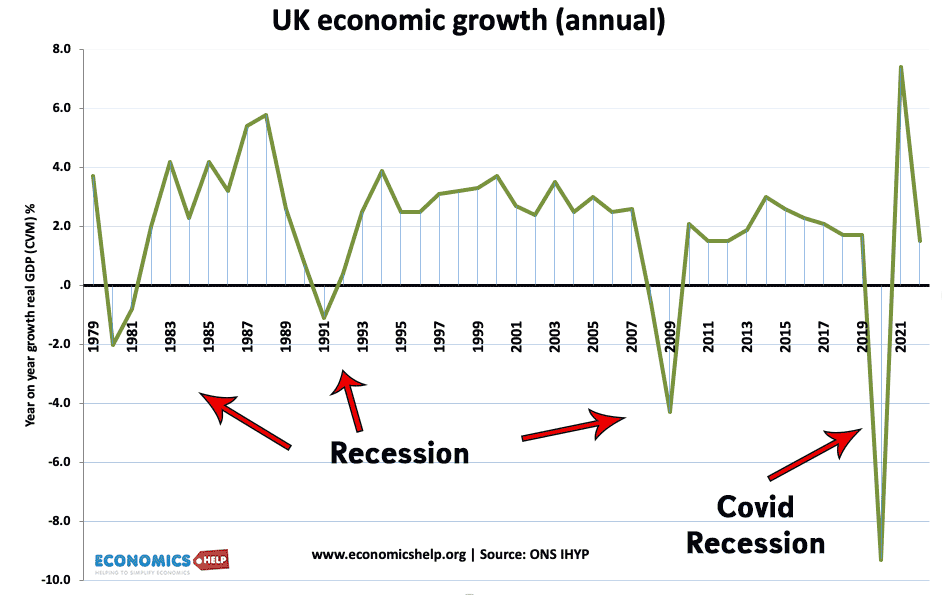 We can see the correlation between the fall in GDP and rise in unemployment. A recession leads to higher unemployment because if firms are producing less, they need less workers and some firms will go out of business leading to redundancies. Even when a recession ends, it can take time for unemployment to fall.

Definition of recession in US

According to the National Bureau of Economic Research (NBER), a recession refers to a significant decline in economic activity, lasting more than a few months, normally visible in real gross domestic product, real income, employment, industrial production, and wholesale-retail sales. It is a less precise definition than the UK and often there is a delay in announcing a recession because GDP data has time-lags. (NBER on recession) The NBER examine these data series.

There is often a delay in declaring a recession because there can be time lags in reporting statistics, especially GDP. For example, the Great Recession was believed to have begun in December 2007 but the NBER didn’t make an official announcement until December 2008.

Again the fall in GDP corresponds to higher unemployment. 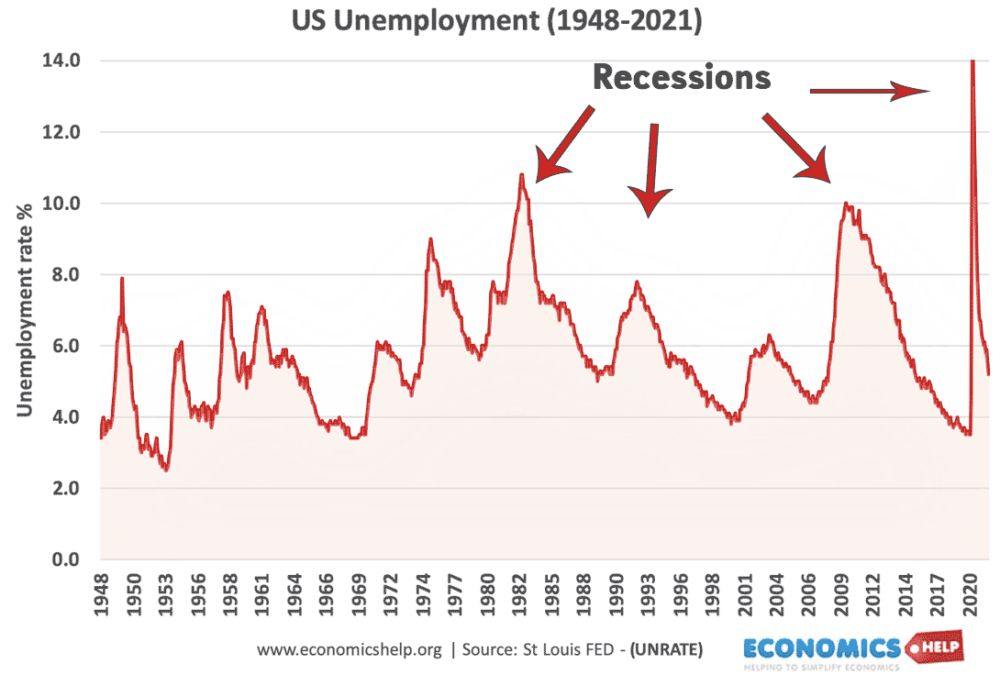 The Covid recession of 2020 was one of the shortest on records starting in Feb 2020, the trough of the recession was April 2020, meaning the recession only lasted two months (although with an unprecedented large fall in GDP during economic lockdown.)

A fall in GDP for two consecutive quarters is sometimes known as a ‘technical’ recession. As technically GDP may be falling, but in practice it could be quite mild. The NBER use the terminology of a ‘significant’ fall in recession. Significant in duration, depth and diffusion.

The most widely used metric to define a recession is GDP (Gross Domestic Product). With a fall in GDP indicating a recession. The advantage of this is that it is simple, and easy to understand and falling output is a key component of a recession.

However, relying on GDP alone can sometimes be misleading as it is possible to have a ‘technical’ fall in GDP due to inaccurate stats or a big industry like oil temporarily reducing output. For example, suppose there was cold weather which reduced output in the oil industry, this may lead to a technical fall in GDP. However, the rest of the economy may be doing well with rising demand and jobs created. Using GDP alone would mean it is a recession, but in practical terms the underlying economy is expanding and doing quite well. A broader definition may discount this unexpected shock to a big industry which distorted GDP.

In the first half of 2022, the US economy entered a technical recession with GDP Falling by an annualised rate of  1.6% in Q1 2022 and 0.9%  in Q2 2022. (This was after a very strong annualised growth of 6.9% in Q4 2021.) However, the economy was widely uneven with strong growth in job creation and retail sales. The economy had mixed signs and there were no overwhelming signs of recession, despite a technical fall in GDP.

The US president Harry Truman quipped.

A depression is considered to be a much more serious recession. There is no commonly agreed definition, but a depression is likely to have some or all of the following characteristics.

Some define a recession as a period of rising spare capacity and rising unemployment. It is possible to have a ‘growth recession’ i.e. very low growth of 0.5% and people feel they are in a recession.

The Sahm Rule predicts a recession by a significant rise in three month average of the unemployment rate.

“(The) Sahm Recession Indicator signals the start of a recession when the three-month moving average of the national unemployment rate (U3) rises by 0.50 percentage points or more relative to its low during the previous 12 months.” (Sahm Rule)

The above graph shows how effective the Sahm Rule has been in predicting recession in America. The 2020 surge in unemployment was slightly distorted by Covid.

What is meant by the term deflationary recession?

So all recessions have deflationary pressures. However, when people talk of a ‘deflationary recession’. They may mean a recession with an actual fall in the general price level. i.e A fall in output and deflation.