The EU relies heavily on Russia for the import of natural gas – around 40% of all natural gas at the start of 2022. Since June 2021, there has been a 60% cut in Russian gas, and this has caused considerable distress in the form of higher prices, inflation, lower economic growth and potentially devastating household bills. Despite the rise in imports of LNG from the US and elsewhere, can Europe cope and will it cause a recession? 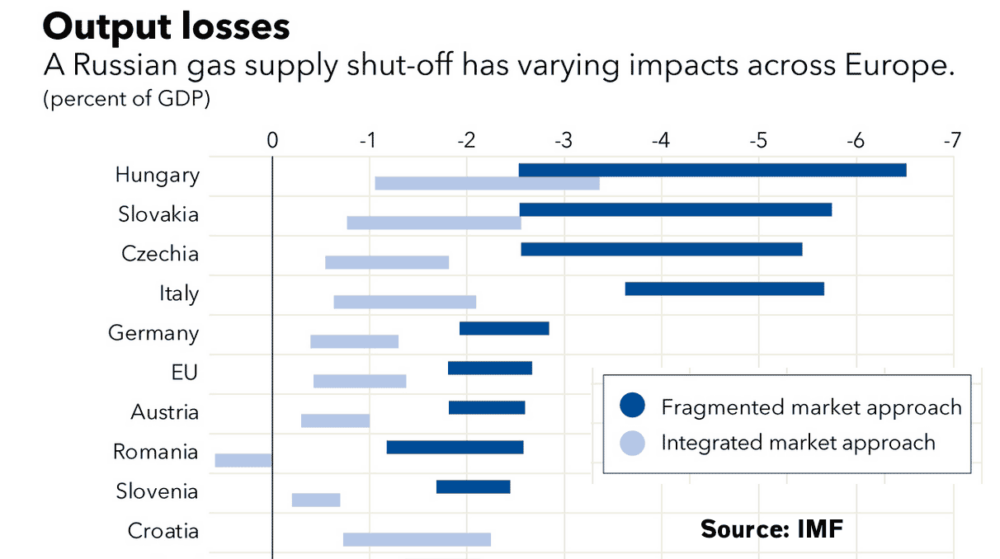 Countries in the East have the biggest dependency on Russian gas and could be the most affected. The IMF predict a cut off of Russian gas could cause between -1% and – 3% fall in GDP for the EU (a significant recession) The IMF sees as very vulnerable, the economies of  The Netherlands, Germany, Italy and Hungary.

At the start of the crisis, European manufacturers protested they would be unable to survive without Russian gas supplies as their production processes had no substitutes for gas. It is understandably business was concerned about gas supplies and rising prices, but inevitably the lobbying underplayed the extent of substitution. Given the recent increases in price, businesses have been surprisingly effective in actually finding ways to substitute gas. It is an excellent example of market forces in operation with higher prices acting as signals and incentives to find alternatives. Ben Moll provides a useful twitter thread with many examples of how firms have actually been cutting gas supplies. Suggesting supply and demand are not as inelastic as the firm’s initially tried to claim.

For example, Mercedes-Benz initially claimed gas was essential, but recently the chief exec claimed the company can reduce gas use by 50% through a mixture of increased efficiency, lower heating temperatures in factories and switching from gas to oil. The car manufacturer Audi now says only 10% of gas is irreplaceable. Other ways firms are reducing or planning to reduce gas use include

The IMF recently report, that Germany has been successful in reducing gas demand by 15%, meeting the EU target from earlier in the year.

However, whilst there has already been some diversification and an increased supply of alternatives, such as LNG from global markets, the IMF warn a total cut-off would make diversification much harder and could still push economies into a serious recession.

Other responses to gas shortages

Countries have been refiring coal power plants. The German Green government admitted that restarting coal-powered energy generation was a very bitter day as coal-powered electricity is one of the worst contributors to global warming. There is also talk of extending nuclear power stations but in the short term, this will lead to little practical supply. However, coal-powered energy will help limit the need to burn gas.

Higher prices do reduce demand. Households and firms have already started to reduce demand in response to higher prices. Traditionally the demand is price inelastic, but the price rises are so unprecedented, that people have been forced to cut back consumption (one might add with real negative consequences for vulnerable people like the elderly and ill).

Cost of living crisis A big difference between UK and France is that France has limited price increases and the government is being sued by energy companies for forcing them to sell energy at a loss. The UK is allowing market forces to dictate prices, as prices could rise to as high as £4,000 a year (even £5,000 is now being quoted) for the average household by Jan 2022 (up from £1,000 at the start of 2021) For many households already struggling with a cost of living crisis, it is a real challenge.

Government mandates on maximum and minimum levels of heating. Spain has set legal minimum of 27 degrees for air conditioning to encourage people to shop in t-shirts. In Italy, similar mandates have prohibited the overuse of air-conditioning systems, setting a minimum of 25 degrees. Heating in public buildings should not be set above 19 degrees. The Italian Prime Minister Mario Draghi said

To some extent there is political support for Ukraine and also support for reducing energy use from an environmental perspective. But the reality of a cold winter and energy blackouts can focus minds on more immediate problems. Combined with all the other problems such as the cost of living crisis, and falling real wages, it could be a factor which encourages social turmoil and falling economic confidence.

Higher prices would feed through to higher inflation. And this would put pressure on Central Banks to further raise rates. For example, in the UK, the Bank of England recently promised to bring inflation down to 2%, even if it causes a recession. But, higher energy prices are forecast to increase inflation to 13% – pressing higher interest rates even in midst of a recession. Even if Russia doesn’t cut off gas supplies completely, the restrictions on supplies have been enough to cause prices to sky-rocket. Ordinary people will really notice the sky high effects

Impact on global markets. The US is sending more gas to Europe, but the downside is that they are sending less to Asia because Europe is paying a premium. We shouldn’t forget energy is a very global market and higher prices will affect the developing world in a very negative way.

Will Russia actually cut off the gas? As I mentioned in a recent article (impact of sanctions on Russia) sanctions on Russia are having a much greater effect than Russia would like to admit. It is more likely that Russia will limit supply to create uncertainty and higher prices. Getting the maximum possible revenue from gas, but cutting off gas supplies completely would be very damaging for Russia given their own perilous economic situation. It is likely the case that Russia is more interested in threatening to cut off supply, to push up prices.

A big question is whether there is continued regional co-operation. If nations start hoarding gas or paying more to get supplies, then it can lead to shortages in some of the poorer countries with lower buying power. However, if the integrated market remains and supply are sent where it is needed most, it will be possible to avoid the worst of the shortages. The EU’s buying power and ability to act as a block have never been more important.