Readers Question: How much are US economic policies are responsible for its current account deficit?

1. Low Savings Ratio/high consumer spending.
This is one of the most important factors. When consumer spending is high, and the saving ratio low, then it encourages people to buy imports. This low savings ratio is due to:

2. Declining Competitiveness in Manufacturing and Industry

You could argue that the high levels of US government debt contribute to a current account deficit. This is because, the large national debt has increased due to tax cuts, which increased consumer spending and helped increase the level of imports and reduce the savings ratio. Also, the high US debt has led to a rise in government bond sales and these sales are often financed by Asian/European investors buying US dollar assets and keeping the US dollar higher than it would be.

A strong US dollar makes exports relatively less competitive. Some economists (and politicians) have claimed that the US dollar is unfairly overvalued due to currency manipulation by China. By aggressively selling Yuan and buying dollar assets, China has kept its currency weak, and the dollar relatively stronger. This makes Chinese imports relatively more attractive than US exports. 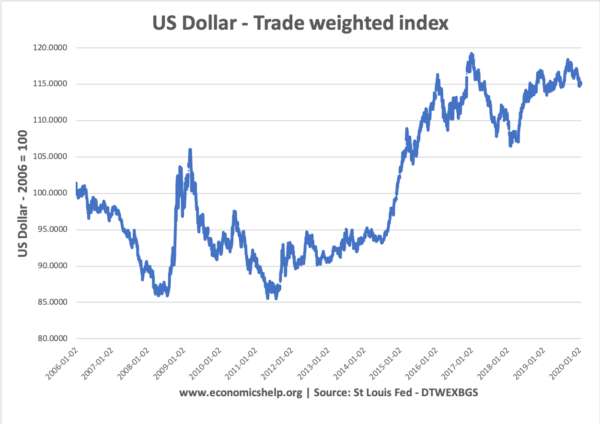 This is a possible reason, though it is worth pointing out that currency manipulation is a controversial point. In recent years, China has had less involvement in exchange rate markets and the Yuan has appreciated somewhat, but still, the US dollar has appreciated 15% on its broad trade-weighted index since 2008

2 thoughts on “Reasons for persistent US Current Account Deficit”