After two years of focusing on deficit reduction, critics argue the government should change approach and concentrate on getting the economy out of the persistent recession. The IMF recently stated:

“The planned pace of structural fiscal tightening will need to slow if the recovery fails to take off even after additional monetary stimulus and strong credit easing measures.”

In the past, the IMF have been a supporter of the government’s austerity policies.

Austerity in the UK

A common response to current crisis is to argue that there has been no austerity, and government spending is as high as ever. It is true that (thankfully) the UK has not embarked on austerity with the same intensity as Eurozone economies. But, the government’s fiscal position, and rhetoric has been focused on deficit reduction. In the middle of a recession, the minor, but still significant reduction, in government spending has contributed to lower GDP.

At a time of falling private sector investment and falling consumer spending, the economy needs a stimulus from other quarters. The government retrenchment has not ‘restored confidence’ as they hoped – it has done the opposite. (Confidence fairy explained)

Government spending has been cut, but, it is also true, the general public would guess the spending cuts are much greater than they actually are. This is because in the past two years, the government has given the impression that spending cuts are the most important policy for the UK economy. The frequent talk of austerity and deficit reduction has created a belief that we are facing much greater austerity than we actually are.

The  talk of job losses, pay freezes and austerity has contributed to record low levels of consumer confidence. At a time when the economy needed positive news, the government have been doing the opposite.

After a third consecutive quarter of falling GDP, UK GDP is forecast to be 0% for 2012 – but forecasts have proved to be overly optimistic.

Government Net Investment as % of GDP

I have posted this graph quite a few times because some commentators are sceptical there has been any cut in government spending at all.

3. Bond Markets Fear Recession as Much as Higher Borrowing

What causes unsustainable debt to GDP ratios? It is a continued fall in nominal GDP. Eurozone bond markets are under great pressure because countries are struck in an unenviable trap of falling GDP and falling tax revenues. The most important thing to make UK debt manageable is to return to a normal path of economic growth. When there is robust economic growth – then the economy can absorb spending cuts.

4. Austerity in a Boom

The UK does have long-term debt issues due to rising social security budget, demographic changes and pressures for government spending on health and education. But, these long-term budgetary issues will not be solved by short-term austerity. The time for austerity is during strong economic growth – not in a recession when the economy is in a double dip recession. Timing of austerity is very important. 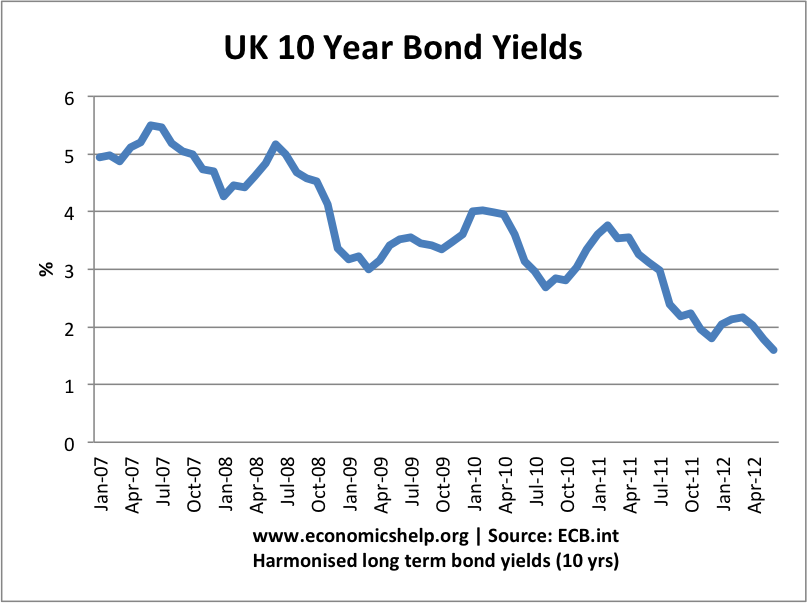 At around 1.4%, it is very cheap for the government to borrow. There are many public sector investment projects which will give a good long-term return. The private sector is not going to solve congestion on British roads. There is opportunity for the government to  invest at a record low rate.

The public have lost confidence in the government and the economy. We have come to expect austerity and recession. A commitment to boost economic growth through higher public sector investment could change that. Confidence will not be changed by mere empty words. A change in policy is needed.

The Euro crisis does mean markets are scrutinising debt more closely, but the UK has the advantage of having its own single currency and independent Central Bank. That is why there is a huge difference between UK bond yields and those in the Eurozone. It is also worth remembering that the debt crisis in the Eurozone is as much about negative growth as it is about high debt.

4 thoughts on “Osborne Austerity Measures are not Working”