Between 2009 and 2015, the Bank of England has been authorized to create £375bn of assets by the creation of central bank reserves. This new money was used to purchase government gilts.

The theory is that by creating extra money and buying gilts from financial institutions, there would be an increase in the money supply and increase economic activity. 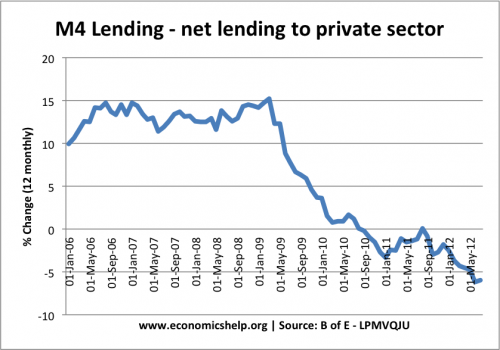 However, despite falling bond yields, and a rapid growth in the Bank of England’s balance sheet as it purchases more government gilts, we have seen a fall in the broad money supply. M4 lending falling 6% in the past 12 months.

In the past four years the stock of outstanding loans to non-financial companies has shrunk by 17% from its peak, to £420bn in June this year.(BBC)

“Four in 10 small firms were refused [bank credit] in the second quarter and this needs to change if the economy is to grow.

The implication is that in a liquidity trap and depressed money, creating money does not necessarily lead to  a growth in the money supply and inflationary pressures as classical theory may predict.

In short, banks may have greater liquidity but they haven’t been lending this extra money to business. Banks feel in the current economic climate, any private sector business lending is risky. Consumer demand is weak, therefore banks are taking this opportunity to improve their balance sheets rather than increase lending.

Does this mean Quantitative Easing has been a Failure?

The current problem with quantitative easing is that the government can’t force banks to lend to the private sector. However, the government are concerned that lack of finance is still holding bank business from investment. Therefore, there have been proposals for a government bank to lend directly to firms and bypass commercial banks.

Quantitative easing in the US 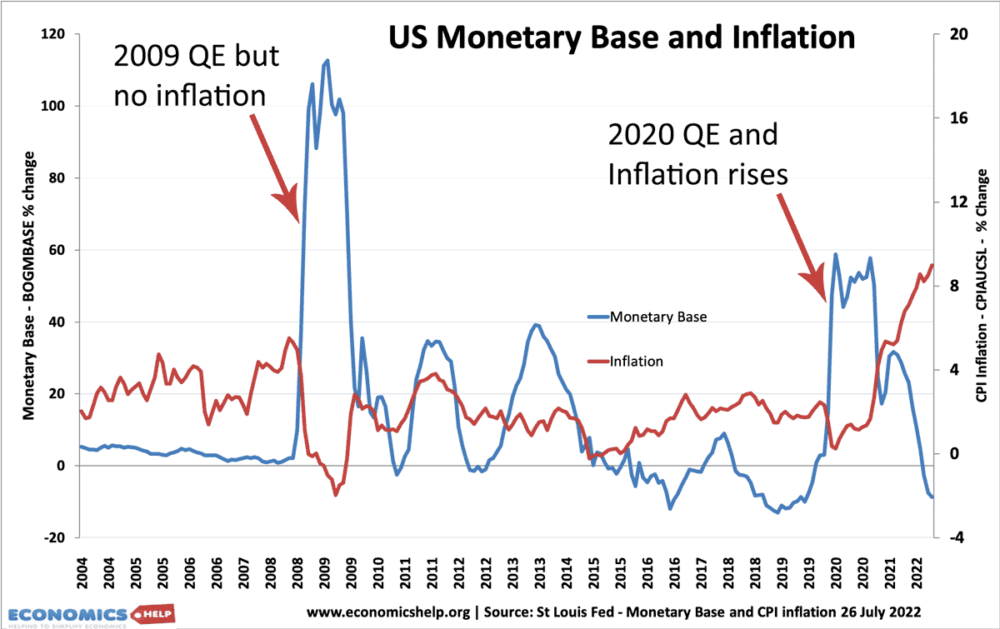 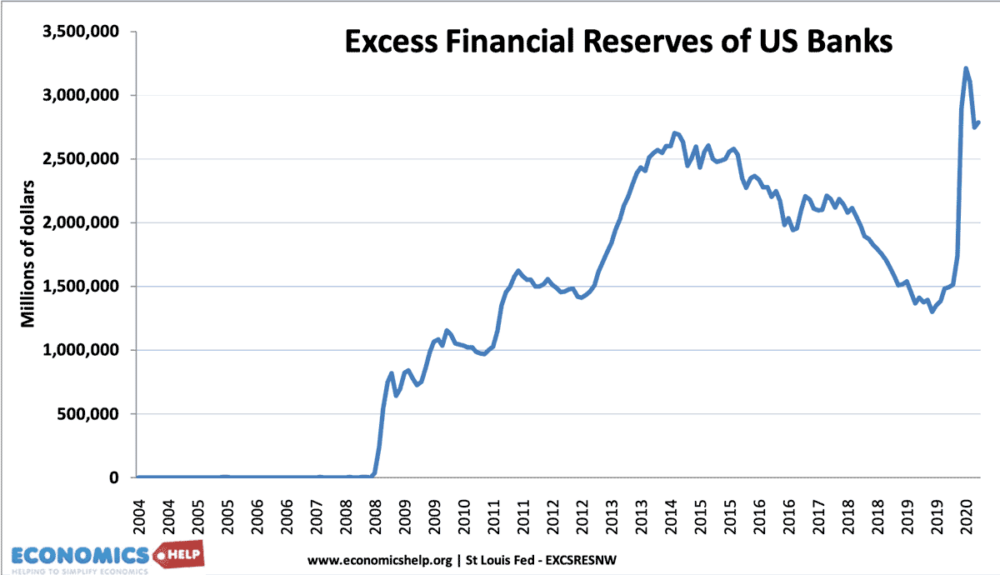 In 2008/09 the Federal Reserve increased the money supply (monetary base) by over 120%. But, this did not cause inflation. In fact, the US experienced temporary deflation. The main reason is that banks increased their reserve ratio. Essentially banks received extra money from Federal Reserve, but did not want to lend it to ordinary firms and households. Therefore, the extra money supply did not reach the wider economy and there was no inflationary impact. 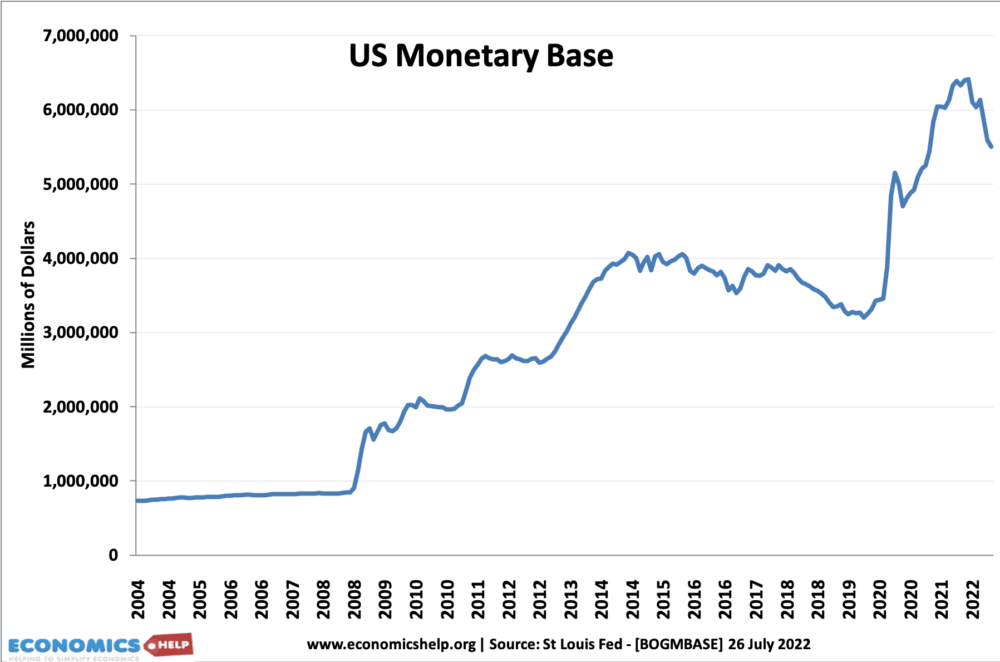 However, commercial banks didn’t lend this money out. Therefore the growth of the broader money supply (M2) didn’t change much. 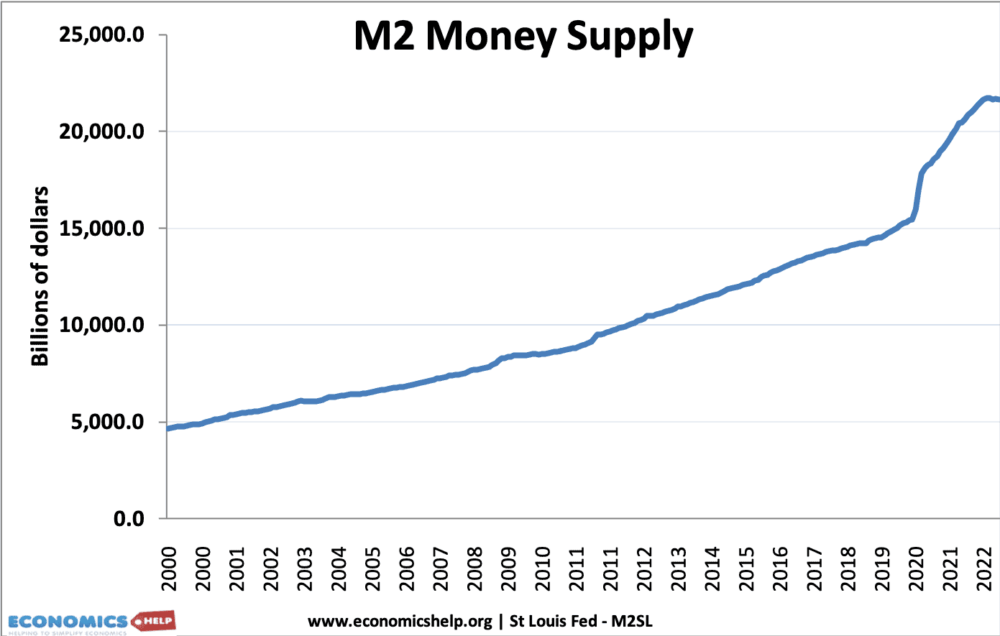 What happened is that from 2009-2015, commercial banks didn’t want to lend this extra money. But, in 2021, there was strong demand for loans  and banks were willing to lend.

The US inflation rate was largely unaffected by the 2009 increase in the monetary base. Stripping out volatile cost-push factors (food and fuel), core inflation remained below the 2% inflation target. But, in 2021, the increase in money supply did cause inflation.