Readers Question: What would happen if a major currency, such as the dollar gets backed by gold again?

If a major currency was backed by gold it means the government must hold sufficient gold to convert representative money into gold at the promised exchange rate.

Outcome of A Major Currency Backed by Gold

Lower Inflation. Without the ability to print money and expand the money supply, inflation is likely to be lower. Low inflation is often put forward as the main virtue of the gold standard. It is argued this can give greater stability in the economy encouraging investment and growth.

Debt deflation. If a gold standard causes deflation, as seen in the 1920s and 30s, it is likely to cause debt deflation. Falling prices increase the real value of debt; this means debtors will have to save more to pay off their debts. There will be a redistribution from debtors to lenders. Lenders may become wealthier, but they may not spend this leading to a fall in overall consumption. This debt deflation is likely to discourage investment by firms.

Constraint on economic growth. A gold standard could easily act as a constraint on growth. The money supply in developed economies has often grown at around 5-7%. As output increases. 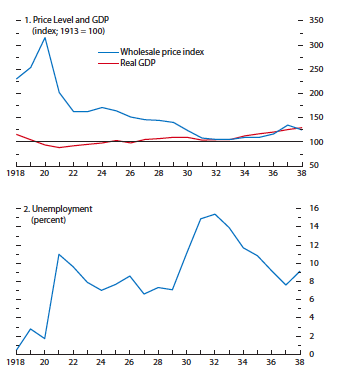 John M.Keynes wrote a criticism of Britain’s gold standard – arguing it would lead to high unemployment and low growth. Many felt Britain entered the great depression prematurely as a consequence of the gold standard and consequent overvaluation of exchange rate.

Constraint on Monetary Policy. In a gold standard, a monetary authority would be unable to pursue a policy of quantitative easing. In a recession or liquidity trap, there would be limited scope for monetary policy. Also, to maintain the fixed exchange rate, it may be necessary to increase interest rates. For example, in 1931, the US increased interest rates to protect the value of the dollar in the gold standard after speculators had forced Great Britain off the gold standard.

With deflation and lower economic growth, it will be harder to reduce debt to GDP ratios. In the 1920s, the UK’s national debt increased as a % of GDP – despite a raft of deflationary fiscal policies. 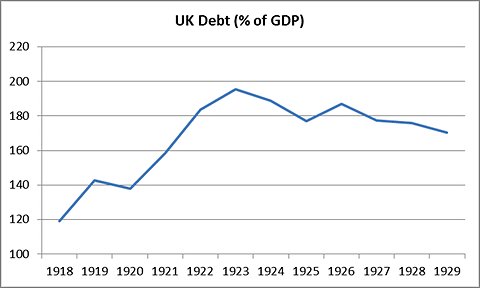 1 thought on “What Happens if a Major Currency Gets Backed by Gold?”