Apart from economics my big interest is in cycling. This weekend, I’m  doing the UK national hill climb championships, a short race up a steep hill in Ramsbottom (the Rake). First prize is a nice cloth cotton cap and a pat on the back. It is unlikely there will be any dope tests (though there are sometimes dope tests at national championships) because they are really expensive and the race is so low key, there isn’t the sponsorship money to pay for them. 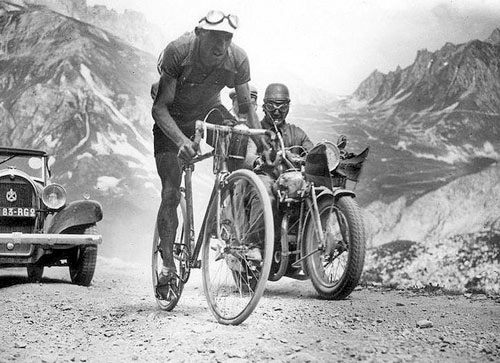 However, across the pond, professional races, such as the Tour de France, are a little more well known than amateur UK races I compete in.

I’ve been following the Tour, ever since I’ve been interested in cycling in the early 1990s. I’m sure there was a time when I looked upon cycling with rosy spectacles and admired only the heroic efforts of riders battling through the mountains with nothing more than bread and water. But, alas the doping culture of professional cycling was so deeply embedded that revelations about EPO and other wonder products slowly seeped through – no matter how much you didn’t want to hear it.

In the 1990s, doping, and the new wonder drug of EPO, became an almost universal choice amongst professional cyclists. With only a few quirky individuals being willing to resist the temptation. The British cyclist Graeme Obree was a world champion and broke the world hour record. But, on signing a professional contract, he soon left in disgust as he realised a very significant % of his salary was earmarked for the ‘medical fund’.

Obree was the kind of character who could walk away from the sport, but most didn’t. An honourable exception was the French cyclist Chris Basson. On one occasion his sponsor offered him a ten fold increase in salary if he agreed to dope. He had great natural talent, but a stubborn resistance to dope. He turned down the doping offer, and was later kicked out of the peleton after upsetting Lance Armstrong with his anti-doping views.

If you read an account by Tyler Hamilton or David Millar, you will see how their resolve to ride dope free slowly evaporated, before they joined all their peers in taking the performance enhancing wonder drugs.

One of the memorable events of the Tour de France was the Festina affair of 1998. A car full of drugs was found, exposing the extent and scale of doping in the peleton. A few days later and riders were protesting at police raids on cars. Legend has it that $100,000s of dope products were flushed down the drain in that part of France as teams tried to cover their tracks. But, riders were protesting not at the fact a team was cheating, but that they were having their easy access to dope taken away. They had become so used to doping, they couldn’t see anything wrong with it. They certainly didn’t want it investigating.

Doping doesn’t create more winners. It just meant that their take home prize money was significantly less because they had to spend so much on dope to help win. If you took away doping from cycling

In short dope free cycling is a clear welfare gain for everyone involved (except the dodgy Spanish and Italian doctors who could charge $100,000 a year for their services)

Unsurprisingly, nearly every rider who confesses to doping say they never wanted to, they only felt obliged to. This makes sense, why would any sportsman want a culture of doping? It’s dangerous, immoral and makes them worse off.

But, once you enter the sport, there was a clear personal economic incentive to dope.

If you take Richard Virenque. He was in the Festina squad busted for drugs. After  finally confessing, he got a six month ban. But, he came back, won the King of the Mountains competition and did financially very well.

If you look at any of the riders who failed a dope test – they usually earned a lot of money. A lot more than those riders who left the sport in disgust. The recent USADA report led to confessions from several top riders, such as George Hincapie, Floyd Landis and Tyler Hamilton. They have received bans, but their career earnings and salaries remain.

Quite simply, if you’re a young cyclist, the profit maximising decision was always to dope.

Simply in pro-cycling, it paid to cheat.

It’s true that you have the adverse publicity of a failed dope test. But, someone like David Millar has  been able to revamp his image (and is actually one of the most outspoke advocates on doping)

The case of Lance Armstrong is more complex. He not only doped, but sued anyone who suggested otherwise. He went to court over a failed bonus payment. Now that he’s been stripped of his seven tour titles, he will face demands to return Tour de France prize money and could get counter sued. But, Lance Armstrong made so much money from the past 12 years through endorsements and sponsorship, that financially, he will be still up on the whole deal.

The tragedy of doping in cycling is that it is a classic case of market failure.

But, because it has been hard to detect, there has always been a strong financial incentive to follow what everyone else is doing.

Thankfully things are changing. Team Sky and Garmin are examples of teams with clear anti-doping measures. But, the cleaner the sport becomes, the bigger the gain from cheating. If everyone else is doping it takes you to the same level. But, if everyone else is clean, you only need a small amount of dope to gain a competitive advantage and all the prize money on offer. The financial incentive is always there.

1 thought on “The Economics of Doping in Cycling”