Readers Question: What are the effects of increased investment on aggregate demand in the short term and the long term.

If Investment increases, then ceteris paribus, AD will increase.

Effect of investment in the short-term

The increase in aggregate demand will lead to higher economic growth and possibly inflation.

In the long term, an increase in investment should also increase productive capacity and increase aggregate supply.

Therefore, investment can enable a more sustainable increase in AD. The increase in capacity enables a sustained rise in AD without causing inflation. If the economy is at full capacity and AD rises then there will be just inflation.

Evaluation of the effects of higher investment

It depends on the economic circumstances. For example, if there was a situation of falling house prices and lower consumer spending, increased investment may be insufficient to increase AD. Also, at only 15% of AD, it is a relatively small component and can easily be outweighed by domestic consumption.

Investment only 15% of AD 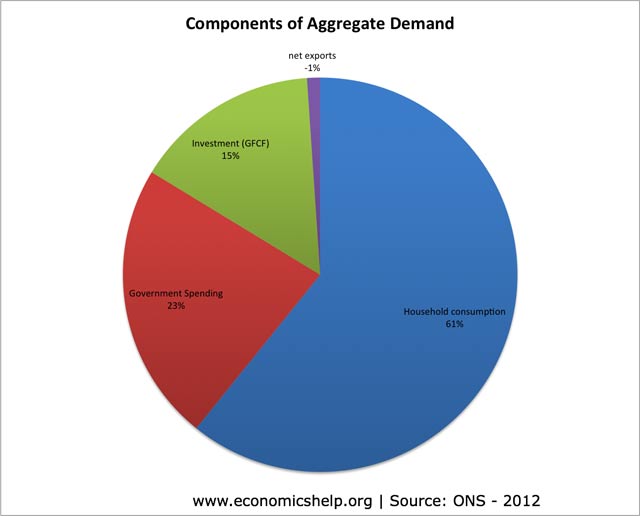 How effective is the investment? Different types of investment can give quite different rates of return. For example, investment in the Sony MiniDisc proved ineffective in boosting productive capacity as the technology was later obsolete. Government investment can also vary in quality. For example, state-supported investment in Concorde (super-sonic) jet had a poor rate of return and the project was deemed unprofitable. However, public investment in improving road network could help reduce congestion and improve long-term economic growth.