I’m currently reading a book Blood, Iron and Gold by Christian Wolmar about how railways transformed the world. 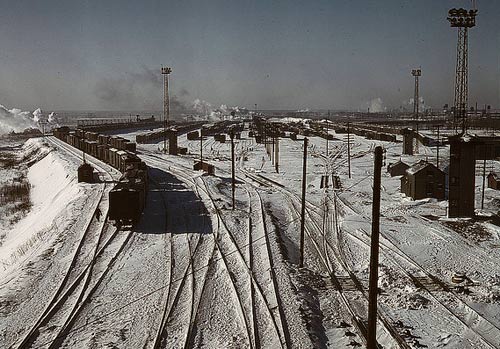 This interesting extract from the political economist Friedrich List, explains some of the economic benefits of railways:

“Railways would carry wood, turf and coal at less than half the present costs. Bavaria, where flour, meat and other foodstuffs are 50 – 100 per cent cheaper than in Leipzig, could export its surplus to the Erzgebirge, the Elbe and the Hanseatic cities. Cheaper food and fuel would partly enhance the well-being of the working classes, and partly lower money wages, increase population and increase the extent of industry. Cheap building materials and low money wages would encourage building and lower the rents in the new and more distant parts of the city.” …. I do not doubt for one minute that this increase in value in Leipzig alone would in a few years exceed the total capital costs of the new railways.” Leipzig-Dresden railway” [1]

In one paragraph, quite a few interesting areas of economic theory.

Other economic consequences of the railways

Farming. Before the railways, farmers had to drive their livestock into towns were they would be slaughtered. This was an inefficient process because it would take many days and during the long walk, the animals would lose much of their body weight. The trains enabled cattle to be transported directly into the centre of towns. It was much more profitable for farmers as the cattle would give more meat.

Railways during the First World War

In 1914, trains were perhaps at the height of the dominance of transport. Some scholars have suggested that trains contributed to the defensive nature of the First World War. Railways could easily provide troops, supplies and munitions to positions of defence. However, they lacked the flexibility to help with advancing troops. Trains and railways were useful for supporting strong defensive positions but not attacking troops. Hence one reason for the stalemate of trench warfare. By the time of the second world war, railways had been superseded by motorised transport (tanks) these were much more suitable to advancing (blitzkrieg) forms of war.

The nature of railways was that they required significant capital investment, but companies could not expect profit for several years. To finance the building of railways, companies looked to the stock market to raise finance. In the UK, the building of the railways saw a rapid growth in the number of companies listed on the stock market. More people considered buying shares in railway companies. Railways contributed to the development of banking and stock markets. In the UK, there was a period of railway mania where speculators flocked to buy shares in any railways company. But, some of the schemes were actually unprofitable and people lost parts of their investment.

At the start of the railway age, governments generally followed a laissez faire approach to business. Early railways were privately owned, financed with little or no government regulation. However, the growth of the railways was important for changing governments attitudes. Slowly governments saw the need to regulate aspects of railway safety (after high profile crashes). Railways also lent itself to monopoly power; many of the late Nineteenth Century railway companies were successful in charging high prices and exploiting their monopoly power. Governments started to regulate these monopoly trusts. In 1887, US congress passed the Interstate Commerce Act, which regulated monopoly power.

The Twentieth Century saw railways fade. They became unprofitable as the motor car proved more efficient for transport. However, governments saw a need to subsidise loss making railways because of their social benefit. Railways may be unprofitable in a free market, but they play a role in reducing traffic congestion, and lower pollution levels. Railways have been effectively nationalised in both UK and US. After a prolonged period of decline in the UK – since the 1980s, trains have seen rapid recovery as crowded roads have forced people to find alternative means of transport.

There are many more aspects to how railways changed society, not least uniting nations, changing the nature of war and leading to greater freedom of movement and work.

1 thought on “Economic changes from railways”