HS2 is a proposed new railway line linking London Euston to Birmingham, and in the second phase – Manchester, Leeds, Sheffield and eventually Scotland.

Supporters of high-speed rail argue it is necessary to meet the UK’s rapidly growing demand for travel. High-speed rail will provide the greenest, safest and most efficient form of transport. The investment will provide a major boost to business and the economy; the faster rail links will help reduce the north-south divide and overcome the externalities of car use.

Opponents of high-speed rail argue that it is primarily an unnecessary project that can’t be justified given the huge cost involved (£88bn in 2020 – much higher than initial estimate of £57bn) critics argue that there are much more pressing priorities such as small-scale road and rail projects which help to deal with smaller bottlenecks. Also, opponents are often motivated by the impact of the new railway on the environment. 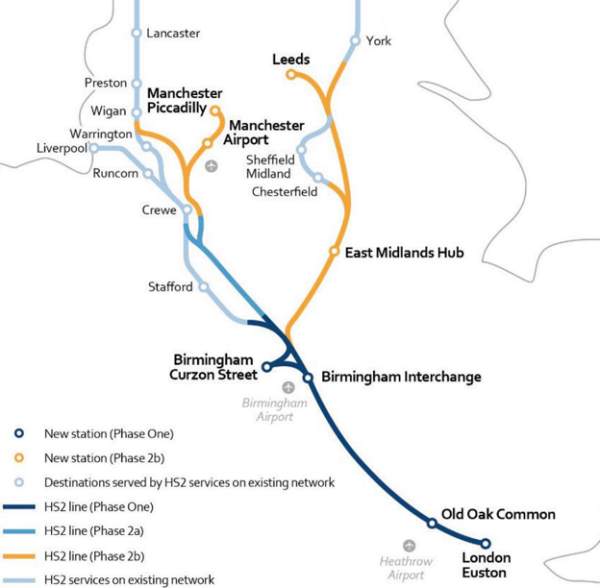 It is not often Britain attempts an ambitious investment project. The political system makes expensive, forward thinking investment projects unlikely to return much political capital. Elections aren’t won by promising improved transport links for the next decade.  True, we like to grumble at the inadequate state of current transport links, but to actually invest the necessary money and time is another matter.

HS2 will cost approx £88 billion to build over 10 – 15 years, but its supporters claim it will generate a return on rail fares, economic growth, and knock-on benefits to consumers and local economies. There is an economic case for HS2 but there are also good economic cases for other infrastructure investment, which is less eye-catching but capable of delivering benefits in a different way.

15 thoughts on “Pros and Cons of High Speed Rail HS2”