Since 2010, the UK economy has been dominated by spending cuts and the desire to run a budget surplus as soon as possible. In the political world, the government deficit is often portrayed as the source of many economic ills and eliminating the deficit one of the highest macro objectives.

However the government deficit (see: Government debt under Labour) never caused the recession, but the deficit was largely a symptom of the global financial crisis. Reducing the deficit at a time of weak growth has arguably slowed down the recovery, and held back the economy. Abolishing the budget deficit may be politically desirable, but is it necessary from an economic point of view?

If you want a target for government borrowing. A more helpful target would be to concentrate on debt as a % of GDP. Stabilise this and then steadily reduce it. But, don’t put budget surpluses on a pedestal. There are more important objectives. There is a saying ‘take care of growth and unemployment, and the deficit will fall because of cyclical improvements (higher growth – higher tax revenues)’

Non-economists can be immensely sceptical of this idea. Perhaps a deficit is seen as almost immoral or dangerous.

One way to approach the issue is to consider UK economic history.

In late 1940, UK public sector debt as a % of GDP was 150% (nearly 2 times greater than current levels of 80%). You might have expected an incoming government to panic about the level of national debt and pursue severe austerity. But, the Labour party set up the Welfare State, nationalised key industries and set up the National Health Service. By 1950, national debt was over 200% of GDP. Did the economy implode under this massive level of national debt? No. Bond yields stayed relatively low and this very high level of government debt was consistent with allowing a post-war economic boom and high growth.

It is very common for people to write something about the horrifying level of UK debt, e.g. from Independent “Britain’s national debt currently stands at a horrifying £1.5 trillion”

£1.5 trillion is a lot of money. But, the key figure is debt as % of GDP, and debt interest payments as % of GDP

Over the 1950s and 1960s,- governments rarely ran a budget surplus. Yet as a % of GDP public sector debt steadily declined.

This is important – You don’t need budget surpluses to reduce debt as a % of GDP.

The key figure for government borrowing is national debt as a % of GDP. Most economists would argue that at 80% of GDP, UK debt needs to be stabilised and reduced over the next decade. 60% of GDP is a good target. But, there is no rush to pursue self-defeating austerity.

One argument against austerity is that higher borrowing will push up bonds. The argument is that government borrowing crowds out private sector investment and markets require higher interest rates to attract demand for bonds. This may occur if the economy is close to full capacity. But, in a liquidity trap, there are surplus savings. The private sector has unused savings that they are not using for investment projects. Since 2009, UK debt has risen, but at the same time, bond yields have fallen.

But we can’t afford it

With spending cuts to local government/police, it is said that the economy can’t afford it.

This is not true. The UK could afford it if it chose – either reduce debt slower or raise taxes. The key is government spending as a % of GDP. It is a choice to reduce government spending to 35% of GDP – lower than most of the post-war period. If we don’t want cuts, we could spend more. There are many ways you can raise taxes in beneficial ways – Sugar tax, land tax, the government’s recent stamp duty rise on expensive houses. The economy won’t buckle if we devote 1 or 2% more of the economy to government spending. For example, it is not clear that the private sector will be more efficient in spending 1% of GDP, than government spending on local policing.

The other thing about government debt is that we are not borrowing from an external party. Most (approx 70-80%) of UK debt is owned by the UK private sector. In a way, we could think about borrowing from ourselves. 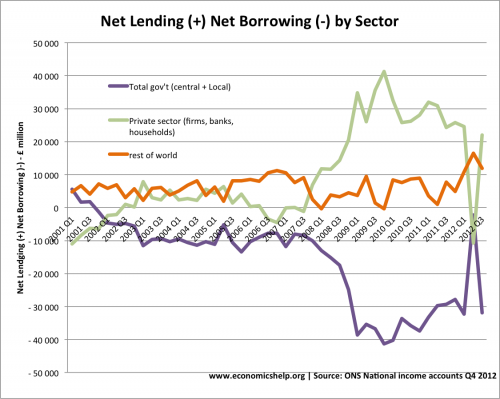 People who say government borrowing is immoral, usually have a large mortgage or work for a company which is borrowing to invest in future capacity.

You could say, future generations will be harmed if we don’t invest in building houses, renewable energy sources and better transport networks.

I like the example of the post-war debt levels. But, this doesn’t mean we should allow the national debt to rise to 200% – it was a different time. In the 1940s, there was patriotic demand for war-bonds, also the UK relied on a large loan f the om US. But, the point is 80% of GDP is not the end of the world, most of the Twentieth Century, government debt was much higher than it is now.

Achieving a budget surplus will make some people who experience spending cuts suffer. They will be worse off. But, there is every likelihood, the economy will do relatively well in the next five years – achieving growth of 2.5%. The UK is not pursuing real austerity with total government spending cuts in real terms (like say Greece). Real government spending is rising. Also, there should be a lot of spare capacity in the economy, after five years of recession and below trend growth. Monetary policy is also accommodative.The economy could do well, but that doesn’t mean it couldn’t do even better.

Spending commitments. The UK is currently committed to a lot of government spending increases from an ageing population – especially with triple lock guarantee for pensions. This kind of long-run trends in government spending does mean, some difficult choices need to be made – e.g. raising the retirement age, raising taxes, cutting other areas of spending.

4 thoughts on “Is austerity necessary?”