So now it is 2013. Britain has spent a number of years with its interest rate set at just about zero, has entered a triple recession, has lost it’s AAA credit rating and Sterling is only worth €1.15 a drop of over 30% against the Euro.

So for those who still cannot see the wood for the trees and still believe the “anti-euro” propaganda wake up and smell the coffee.

I will put it this way, despite the turmoil the Eurozone has been suffering for the last 5 years, despite its inability to drop interest rates to zero to make itself more competitive, despite its differing economies and demographics it has risen in value against the UK as a Nation but over 30%. Can you smell the coffee yet? 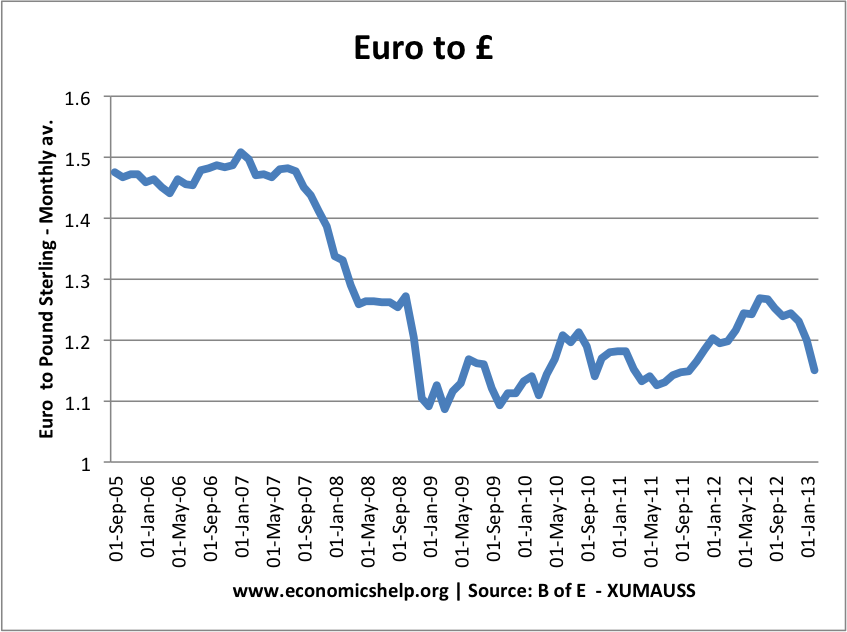 One example is judging the desirability of an economic policy from the strength of a currency.

When you have a large current account deficit, when your economy is in recession, a depreciation is exactly what the economy needs. Having a strong currency, when economic fundamentals don’t support that level just creates further economic misery.

One obvious example that springs to mind is the effort in 1992 to keep the Pound artificially overvalued within the ERM. To keep the Pound at a set level against the D-Mark, we put up interest rates to 15% and caused a severe recession. The strong pound was completely unsuitable for the UK economy, but we persisted with the policy because of a mistaken belief that keeping a ‘strong’ pound was ‘good’.

Another classic mistake was the decision in 1925 to rejoin the gold standard at a level that was unsuitable for the post-war UK economy. The consequence of this decision was deflation, low growth and a rising debt to GDP ratio. (see: UK economy in 1920s)In this case, the strong pound was damaging to the UK economy.

Strength of the Euro 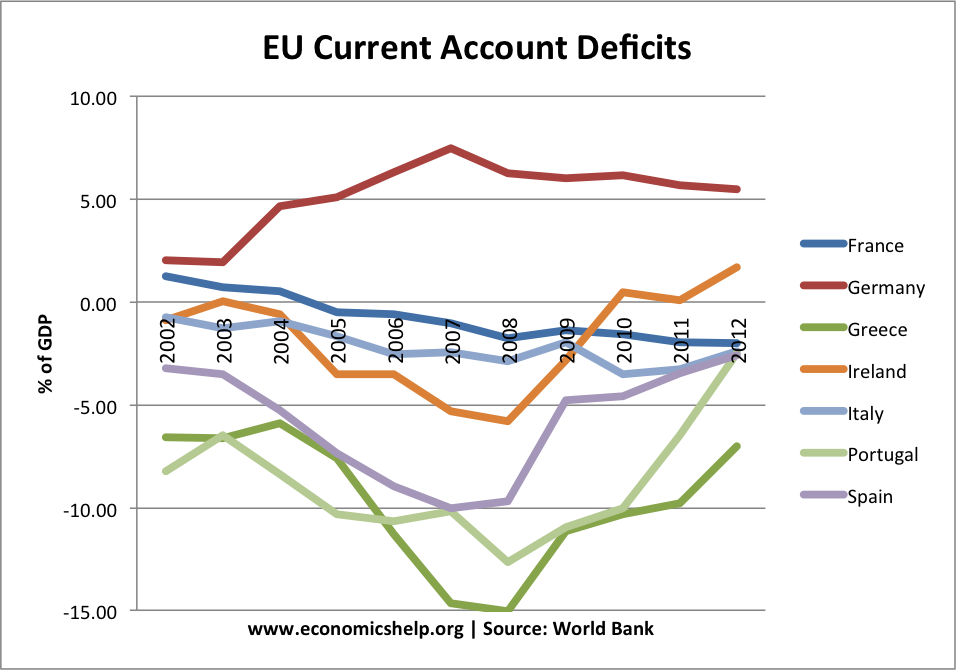 In 2008-11, Eurozone economies faced exceptionally large current account deficits of close to 10% of GDP (and up to 15% in the case of Greece). This reflected a fundamental misalignment of the economy. Within the Euro, Portugal, Spain, Greece were uncompetitive, the Euro was too strong making their exports very uncompetitive. In the Eurozone, exporters couldn’t compete leading to lower demand, lower exports, and higher unemployment.

If the UK had been in the Eurozone, we wouldn’t have been able to devalue by 30%. The Pound could now be 30% overvalued. The consequence of this would have been:

But, isn’t a strong currency a sign of economic success and a factor which increases living standards?

In the long-term, an appreciation in the exchange rate is usually a reflection of strong economic performance. For example, suppose the UK experienced rapid growth in productivity and competitiveness. This would make UK exports more competitive; demand would rise and this would cause the value of the Pound to steadily increase. The strong pound is a reflection of the strong economic performance. Despite the appreciation in the exchange rate, exporters would continue to be able to sell their goods because of their productivity growth.

The appreciation in the exchange rate would also help keep inflation low, and reduce the price of imports. This would increase domestic living standards because we can import goods at a lower price.

The important thing is that a strong currency is desirable if it is the result of increased competitiveness.

However, if a currency rose because of speculation or because it is in a single currency, then the rise in the value of the currency may be unsuitable and cause an imbalance of domestic demand.

Wouldn’t Joining the Euro have forced the UK to be as competitive as Germany?

One argument proposed in favour of the Euro was that it was forced countries to be as competitive as everyone else. Because you couldn’t devalue, you would have to increase productivity and be competitive. It was hoped that joining the Euro, would make Italy and Greece as competitive as Germany. Unfortunately, this didn’t happen. Joining a single currency doesn’t change the underlying structural factors that determine productivity and competitiveness. Unfortunately, it proved wishful thinking that Italy and Greece could tie their fortunes to the German economy. If the UK had joined the Euro, I strongly doubt, this would have caused a ‘productivity miracle’.

1 thought on “Is a strong currency a good thing?”